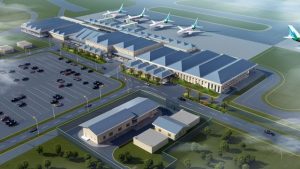 A motion at the People’s National Congress Reform’s Congress to rename the Cheddi Jagan International Airport to also honour that party’s founder-leader, Forbes Burnham, and Amerindians has been referred to a special committee, party sources said.

The party official explained that the decision to dispatch it to party committee was because of the implications and the need to seek technical advice because that was not a matter that Congress could decide on.

The committee would be named by the party.

After some deliberations on the motion, the Congress highlighted that there would be international implications for renaming the airport again.

Formerly Atkinson Field,, when it was used during the Second World War, the airport was renamed Timehri International Airport after a significant upgrade in 1968.  It was again renamed in May 1997, two months after President Dr. Cheddi Jagan died of a heart attack.

According to the motion moved by the Atlanta Chapter’s chairwoman, Carol Trim-Bagot and seconded by its Chairman, Denis Austin, the renaming will “keep the importance of the two founding fathers”. That group wants the Congress to “rise up to vote to move this resolutions to the Cabinet and the Parliament of Guyana”

The two-page motion states that the Timehri Airport was renamed to the Cheddi Jagan International Airport to honour the contribution of Jagan to Guyana, but Burham “played a major role in he political, social and economic development of Guyana” such as in the areas of infrastructure such as roads, highways and bridges, free education fro nursery to university and free health care.

Noting that Burnham was also one of the founding fathers of the 15-nation Caribbean Community, the Atlanta Group of the PNCR’s North American Region noted that the gateway to Guyana is named after Jagan but Burnham’s “leadership and commitment to the people of Guyana are equally important to the Guyanese community and our Caribbean counterparts”.