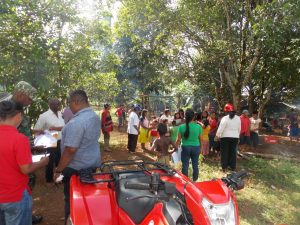 Minister of Citizenship, Winston Felix visited the Indigenous community of Khan’s Hill in the Barima-Waini Region to distribute additional supplies to the Venezuelan migrants, on Friday last.

This is the minister’s second visit to the area to distribute food and sanitation supplies to migrants crossing the border from the neighbouring country, government’s Department of Public Information reported on Thursday.

Two weeks ago, the Ministry of Citizenship in collaboration with the Civil Defence Commission (CDC), International Organisation for Migration (IOM) and United Nations Children’s Fund UNICEF distributed much-needed supplies to the migrants.

During the visit, the Minister of Citizenship identified a prospective piece of land on which government is planning to establish a humanitarian centre for migrants crossing the border into Region One.

Minister Felix had noted the government will ensure they “[Venezuelan migrants] are treated humanely”. He disclosed that they would have been “seeking to identify areas in which government can control the inflow of Venezuelans and we can settle them in a given area.”

A multi-agency committee, which includes the Civil Defence Commission (CDC), the Guyana Police Force (GPF), the Ministries of Citizenship, Indigenous Peoples’ Affairs, Public Health, Communities and Social Protection, was established to address the influx of Venezuelans in Guyana’s border regions.

The agency is currently assessing the situation in Regions Seven and Nine to ascertain the number of migrants in those areas.