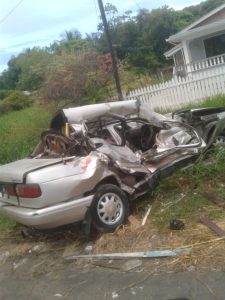 Three persons died early Sunday morning when the car they were travelling in slammed into the back of parked lorry on the La Grange Public Road, West Bank Demerara, police said.

Dead are the car driver Jonar Devon, 33, a contractor of 22 Nismes, West Bank Demerara and the occupants Devindra Hardyal, 25,a promoter of 30 Public Road,La Grange, and Rishi Pasha ,20, of   3 La Grange.

Seriously injured is  David Bourne, 22, of Goed Fortuin,West Bank Demerara. He is receiving treatment at the West Demerara Regional Hospital.

The Guyana Police Force said the motor car, PDD 7182, which reportedly slammed into the rear of the lorry at about 4:20 AM

“Enquiries disclosed that the quartet was having fun at a party at Stanleytown, West Bank Demerara and was heading to Goed Fortuin to drop off David Bourne when tragedy struck as the driver of the vehicle which was proceeding north along the western carriageway, reportedly at a fast rate of speed, lost control and collided with the lorry which was properly parked on the parapet of the western side of the road.  As a result of the impact,the Lorry was shifted from its location,” police said.

Devon and Hardyal were pronounced dead on arrival at the hospital ;Pasha died about 7 AM.