There were no locks or chains at Pegasus Hotel’s fire exits- Fire Service, hotelier Robert Badal 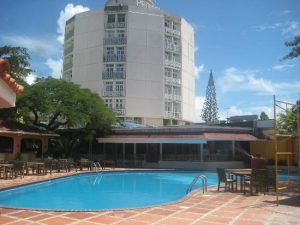 The Guyana Fire Service (GFS)  Thursday night confirmed that there were no locks or chains on any of the emergency exit doors at the Pegasus Hotel, a position that the hotel stated categorically.

“The evacuation was orderly and swift as smoke alarms in every room alerted guest. At no time were any locks on exit doors as there is never such at any other time,”  owner of the Pegasus Hotel, Robert Badal said.

The fire that occurred in the eastern kitchen on the lower flat Sunday night had caused thick white smoke to fill sections of the hotel.

Chief Fire Prevention Officer of the Guyana Fire Service, Andrew Holder surmised that New York-based Pastor Ellsworth Chester, who claimed that the exits were chained and locked, might have tried to leave one of the hotel’s floors through a locked door to an area where items are stored.

Holder said inspections conducted on the hotel on Wednesday and Thursday revealed no evidence that the doors to the emergency exit were locked. “I saw no indication of where and how the doors could have been chained with a padlock. These aren’t doors that carry hasp and stable or openings for a chain to pass so, for me, I see no sign that the exit doors upstairs in the hotel were chained and padlocked,” the fire officer told Demerara Waves Online News.

For the Pegasus Hotel’s Managing Director’s part, he also said labelled Chester’s account as “totally false”.  “The account of one person saying that he was a pastor and having to evacuate his family from a higher floor and saw chains on exit doors was totally false. We put all families on the same floor and there is no record of that pastor being a guest. We have footage of everyone who were guest of the Hotel on that night,” Badal said.

Holder explained that on closer examination the door that he had seen that was padlocked was one on the eastern end of the ground floor in the kitchen area that leads to a storage area. “I came to understand after that that door was not a final exit but it was leading to an area where they normally store and cut up their meats,” he told Demerara Waves Online News.  The Fire Prevention Officer said Badal has since implemented his recommendation that that lock be removed. “Although it’s leading to the storage area, it has other openings that can take you to a final exit so I asked him to remove that,” he added.  Holder has also recommended that the hotel install illuminated signs to the fire exit that is connected to a standby electricity source  should there be a power outage.

Holder, who is also a senior investigator, said he was dissatisfied with the Pegasus Hotel’s alarm system as he was not convinced that the alarm had worked at the time of the fire. “To now, he has not satisfied me or the fire department that the fire alarm system is working. According to him, he had some expert from the HoneyWell company come and look at it so I asked ‘ did he test the alarm?’ ‘No, but he is expected to return shortly to test the alarm’ and I want to hear the alarm. I want the experts to come with a notification to both staff and occupants the alarm will be tested so I am giving him all the benefits of the doubt to put his system in order,” he said.

Pegasus said its latest model Honeywell Fire Response System performed well,and  “all our fire extinguishers were fully charged and management and staff of the Hotel was professional and up to the task.”

The Guyana Fire Service official said all of the rooms have smoke detectors.

Holder said he was at the Police Headquarters at the time if the fire call was received and when he arrived on the scene he heard no alarm even as guests were  still leaving the premises. “The alarm is not supposed to be silenced until everybody is verified out of the building and when I got there, which was in reasonable time, it was still not on,”  Holder said.  He said Badal has since informed him that the manufacturers of the alarm system are due in Guyana in the coming days to check the alarm system. Several guests confirmed tho reporters at the scene that they did not hear an alarm. One of the guests said he was alerted by a man, later identified as Chester, who banged on his room door and told him there was a fire.

The Pegasus Hotel’s Managing Director said the smoke alarm triggered emergency response but residual smoke entered the lobby and a few other areas which caused anxieties and inconveniences to some of our guests. “While there was no immediate serious danger, management decided to evacuate guests for a short period out of an abundance of caution as per our standard operating procedure.” “At no time was fire officers required to evacuate anyone. Guest shortly returned to their rooms,” Badal said.

Badal has since threatened to sue all the media houses for their coverage of the fire. The Managing Director of the 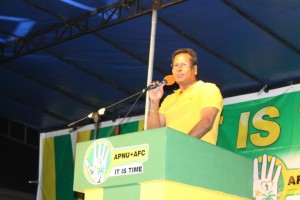 FLASH BACK: Robert Badal addressing an APNU+AFC rally at Anna Regina ahead of the May 11, 2015 general elections.

49-year old hotel said his hospitality enterprise was now threatened. Badal, a known supporter of the Alliance For Change political party that is part of the governing coalition, has since called for legislation and regulations that address “destructive tendencies of the media otherwise our country with all its potential would forever remain poor”.

However, he was not at the fire scene and a manager refused to speak with the media even though the questions were asked him very loudly as he walked away.

The United States State Department, in a travel alert, had noted that several American government personnel had decided to seek accommodation elsewhere.

2018-08-09
Denis Chabrol
Previous: No trafficking of Haitians through Guyana; Venezuelans being watched
Next: ‘We are committed to providing the resources for you to fulfil your duties’ -Minister Harmon commissions two new Islanders for GDF