No trafficking of Haitians through Guyana; Venezuelans being watched 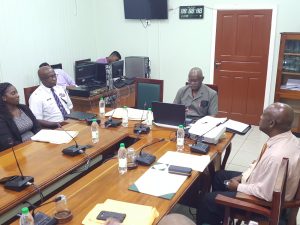 Minister of Citizenship and Immigration, Winston Felix (centre) appearing before the parliamentary sectoral committee on foreign relations. He was accompanied by officials from his ministry, the General Regiustrar’s Office and the Immigration Department.

There is no evidence that  Haitians are being trafficked through Guyana to French Guiana, but authorities here are focussing on possible trafficking of Venezuelans, Minister of Citizenship and Immigration Winston Felix said.

“First of all, you are assuming that given the numbers of Haitians there is trafficking. We have not suspected any trafficking of Haitians in Guyana, through Guyana or whatever, at least up to this point of reporting-zero- no suspicion of any trafficking and if ever we suspect anything we are not going to wait for another nation to deal with, it will be counted in the figures that we have produced,” he said.

Appearing before the bipartisan parliamentary committee on foreign relations, he urged the opposition People’s Progressive Party Civic (PPPC) to support its claim of collusion involving officials air-side of the Cheddi Jagan International Airport (CJIA) to facilitate the arrival of Haitians here. He added that trafficking is hardly ever done through the airport at which immigration authorities who use certain yardsticks to determine whether visitors should be allowed entry.

PPP committee member, Nigel Dharamlall suggested that “we are complicit in this whole operation from Haiti to Guyana and  government was “unconcerned” that Haitians have been arriving in Guyana legally, leaving illegally and entering French Guiana illegally, possibly trafficked, murdered or tortured, but Business Minister Dominic Gaskin debunked that. “I don’t think anyone said we were not concerned. We recognise it as a problem,” he said.

While Haitians were in the past being singled out for special attention by immigration personnel and even refused landing and returned to Haiti, he said emerging from a recent meeting in Jamaica,  Haitians were now entitled to six-month automatic stay in Caribbean Community (CARICOM) member nations that are party to the CARICOM Single Market (CSME) regime. Contending that there was an attempt to merge trafficking of persons with the movement of Haitians through Guyana an alleged incident at the airport, Felix ruled out blocking Haitians from entering Guyana.

“We are not going to stop them…the policy has changed. Then, we had an issue whether they were CSME covered. Now we know that they are CSME covered… Check Jamaica last weekend. The meeting there made it clear that the Haitians are subjected to CSME and are entitled to six months upon landing in any Caricom country,” he said.

The Citizenship and Immigration Minister said government was paying greater attention to Venezuelans as victims of trafficking in persons, and if that is confirmed the Ministry of Foreign Affairs would take steps to inform other countries. “Our evidence on trafficking, so far, suggests that it is not the Haitians who are being trafficked here. As we have seen in May month it’s Venezuelans. We saw that and if I have to look for trafficking in Guyana, I am looking at the Venezuelans- you know why? because two times or three times the women coming are coming from Venezuela and women are the victims of trafficking more than men,” he said.

Felix assured that Trafficking In Persons is being taken very seriously because it amounts to the enslavement.

The former Police Commissioner noted that Haitians have been passing through Guyana to French Guiana since 1982. He added that previous efforts have been made to shut down the’ back-track’ route across the Corentyne River that borders Guyana from Suriname.