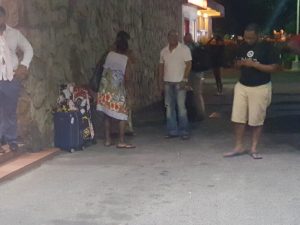 The United States (US) State Department Monday evening said a number of American government workers have moved out of the Pegasus Hotel following Sunday night’s fire in the kitchen.

“Guyana Security Alert: There was a fire at the Pegasus Hotel in #Georgetown on August 5. Reports indicate some fire alarms did not sound and some fire doors were locked. As a result, some US Government personnel staying at the hotel have decided to move to other locations. https://t.co/f5KNF3V4XI ,” The State Department says in a Tweet.

The Managing Director of the Pegasus Hotel did not give media interviews. Instead, the hotel issued a statement that made no mention of the allegations made by guests and Patrons.

Those included locked and chained exits and the failure to alert guests of a fire by sounding an alarm.

The Pegasus Hotel said the fire in the kitchen was contained and extinguished by staff before fire fighters arrived.

A Guyana Fire Service officer confirmed that a number of the exits were locked at the time of the fire.

Below is the full text of the statement issued by the Pegasus Hotel:

At approximately 10:30pm last evening there was an incident at the Pegasus Hotel. A small fire ignited on a fryer in our kitchen. This resulted in residual smoke entering the lobby area and a few other areas which caused anxieties and an inconvenience to some of our guests. While there was no immediate serious danger, some guests were evacuated for a short period out of an abundance of caution and as per standard operating procedures to ensure their safety which is our utmost concern.

Shortly after the fire ignited, the fire alarm located in the kitchen went off and Emergency Response immediately kicked in. The fire was extinguished within ten minutes of the alarm by our staff. The fire department was alerted and responded promptly.

The residual smoke did cause some inconvenience to some hotel guests which we regret. However the situation was quickly brought under control. No one was injured and guests were promptly evacuated for a short period. We understand the anxieties of our guests who were inconvenienced. We are pleased that all guests were returned to their rooms within a short period of time and that there were no injuries or any need for relocation to another property or alternative accommodation.

Pegasus offers its sincere apologies to the guests who were inconvenienced.

The safety and comfort of our guests are of utmost importance to us. It is for this reason that we invested in the latest model Honeywell Fire Response System. We thank the members of staff for acting promptly and we also thank the Guyana Fire Service and the emergency response units for their prompt and professional response.

Pegasus has had a long reputation for a safe and friendly culture and environment and we will strive to continue this tradition by investing in the best available technology, in addition to learning any pertinent lessons from this incident after a complete investigation and analysis are done.

2018-08-06
Denis Chabrol
Previous: Russian alleged assault of Guyanese mine ranger heads to Cabinet; probe launched
Next: Cash transfers of some oil earnings to the poor a good idea but must be linked to job creation, improved access to social goods, tax compliance- experts