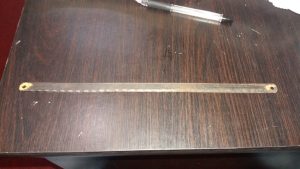 A hacksaw blade that prison authorities believed was used to cut cell bars at Lusignan Prison to allow for the escape of two murder accused.

Prison guards have scuttled a plot by two murder accused to escape from the Lusignan Prison, leaving Prisons Director Gladwin Samuels baffled at how the prisoners got cutting equipment.

‘During security checks conducted, the discovery was made. One steel bar was discovered cut while attempts were being made to cut another. From observations, the cutting of the second bar was to allow easier exit,” he said.

Samuels indicated that he was surprised that the prisons were in possession of cutting equipment and actually had cut the bars.

“Due to the nature of the housing unit and the Standard Operating Procedures those prisoners should not have been in possession of cutting equipment and more so being allowed to actually cut,” he said.

Sources have told Demerara Waves Online News that the bars were cut at the solitary confinement cell, and if the bars had been removed prisoners could have exited to the catwalk.

Samuels said  police have been called in to conduct a full investigation. The prisoners’ security classification has increased and additional layers of security are in place.