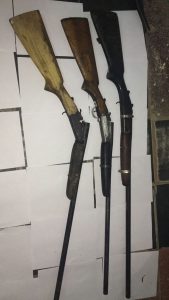 Five males, including a 15- year old, were arrested by security forces at Ekura Creek, Canje River and six guns and ammunition seized.

The Guyana Police Force said the five shotguns,a pistol and three live rounds were found along with 12 kilogrammes of dried cannabis.

Poluce said a five-acre plot of cannabis was destroyed. 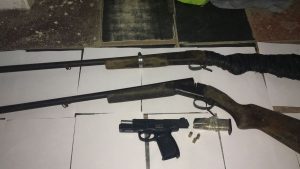 The almost sixteen hours operation began at 3 AM and involved 14 ranks inclusive of two senior officers ,one from the Guyana Police Force nd the other from the Guyana Defence Force.

“The team first went to a location at Ekura where two camps with several occupants were seen but on seeing the ranks the men fled into the thick vegetation and escaped ,leaving behind three single barrel shotguns .

Several miles further up the creek at Wakie,Ekura, the ranks descended on two more camps with six males,one being a fifteen year-old ; one escaped,” police said.

A  search of their camps revealed a 9mm pistol with three live rounds ,two single barrel shotguns , and the processed cannabis” investigators said.

The cultivation and camps were photographed and destroyed by fire; the other exhibits lodged, police added