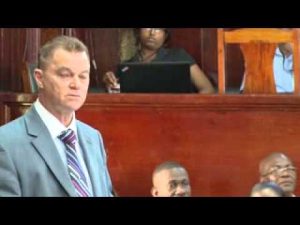 “Honourable Member Mr. Harry Gill will answer to the Committee of Privileges for his conduct in this matter,” Scotland said. In part,  Gill states that a number of parliamentarians were “getting tired of the double standards adjudicated from the Chair”. “There are inconsistencies in the Speaker’s rulings on sub judice matters and inconsistencies in his demand for source documents. This is the double standard I’m talking about,” Gill adds.

The decision was in keeping with a motion by Prime Minister, Moses Nagamootoo after Scotland expressed concern about the letter in the privately-owned Stabroek News.

Dr. Scotland, however, said in keeping with parliamentary rules the House Speaker could not be criticised except by a motion properly brought before the House. “If the Honourable Member Mr. Gill was dissatisfied with the rulings or decisions of the Speaker, he could have taken a course of action provided in the Standing Orders to which all members in this House have submitted themselves when they became members of this House. He has proceeded, instead, on a course of action which is totally impermissible under the Standing Orders. His conduct is an affront to the office of Speaker, the person of the Speaker and to the dignity of this House,”  Scotland said. He noted that that was the second time in two years that such a disregard for the rules of this House has been displayed by parliamentarians and “it may be that the silence of this House about the previous occasions has emboldened Mr. Gill”.

Opposition Chief Whip, Gail Teixeira defied the House Speaker’s refusal to give her an opportunity to speak because the relevant parliamentary rule does not provide for a debate and she stated that parliamentarians’ criticisms outside the National Assembly Chamber could not be questioned because the fundamental human right to freedom of expression would be trampled upon. “Mr. Speaker, under the Constitution of Guyana Article 146, the freedom of expression contains outside of this House. No one has showed any disrespect to you, Sir, in the House. We have a right to speak outside of this House so you want to take all of us to Privilege,” she said.

After Teixeira spoke, the House Speaker ordered that her comments be removed from the official record of the National Assembly because she was not granted permission to speak. “Honourable Members, the last set of remarks will be expunged from the record. Those remarks were made without the permission of the Speaker and a member must at least obtain the authority of the Speaker if he is going to address the House. That rule has not change and will not change,” the Speaker said.

Teixeira said the Prime Minister cited the wrong standing order to ask that MP Gill be taken before the Privileges Committee.

The PPP back-bencher publicly advised the House Speaker to view some of the videos posted on Social Media “to see how biased he appears, imposing his authority to disrupt an Opposition MP on a roll during the debates, or simply to prevent bad news from reaching the press.” Gill, in concluding in his letter, stated that “it is not the intention of this letter to bring the Speaker of the National Assembly into disrepute. It is merely my hope that the dignity of the House prevails”.