More Guyanese to be employed with Edison Chouest Offshore 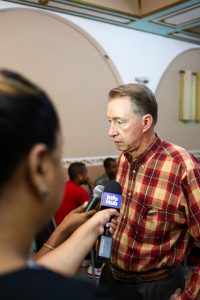 More Guyanese are expected to be employed by Edison Chouest Offshore as the company aims to soon open its local company ‘G (Guyanese) Boats’ in Georgetown to support Guyana’s emerging offshore oil and gas sector.

That was disclosed by the company’s Business Development Manager, Daniel LaFont, who was at the time speaking on the sidelines of the El Dorado Offshore training session for Guyanese mariners yesterday. The 40 seamen were being instructed in occupational safety for jobs in the offshore oil and gas industry.

“We are going to have Guyanese that will be working and manning our office, including one that is responsible for health and safety. The persons we will hire here will not only be trained here, but we will go back to the facilities in Louisiana to get hands-on training of what we do here,” La Font was quoted by government’s Department of Public Information as saying. 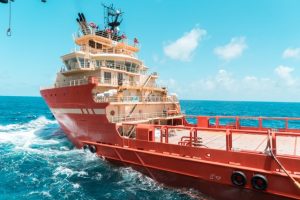 An Edison Chouest support vessel alongside the Noble Bob Douglas drills-ship that is preparing for commercial oil extraction in early 2020.

Some 53 Guyanese are currently working on the Edison Chouest vessels. LaFont noted the company currently has nine vessels supplying ExxonMobil operations. With the rise and development of the oil and gas sector, local companies have been working towards improving and raising the standards within their operations.

On July 25, the Guyana Seafarers and General Workers Union (GS&GWU) officially announced formation. The body was established to provide representation to Guyanese seafarers and bridge the existing gap between them and their employers.

General Secretary of the GS&GWU, Simone Fortune said the maritime sector is vital to the country’s economy, therefore emphasis must be placed on workers compensation, wages and other benefits, living accommodation onboard vessels, meals, safety equipment, resting hours.

2018-07-27
Denis Chabrol
Previous: CARICOM countries exposed to training to better monitor medicines
Next: No charges for Minister Broomes, others in parking lot fracas