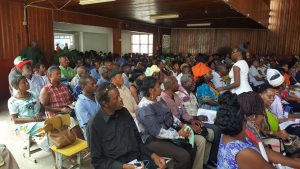 FLASH BACK: A section of the gathering of the Cuffy250 Committee 5th Annual State of the African Guyanese Forum.

Afro-Guyanese businesses are being mobilised to show them how they can access financing and understand some of the basic rules of doing business, as part of an overall move to nurture more Black-owned businesses, a top local organiser said.

The first of three outreaches is slated for Wednesday at 1 PM at Critchlow Labour College, Woolford Avenue.

The Chief Executive Officer/ Secretary of the International Decade for People of African Descent Assembly- Guyana (IDPADA-G), Olive Sampson said the activity forms part of President David Granger’s mandate to the local organisation that is responsible for coordinating activities for the observance of the United Nations-designated decade (2105 to 2024).

Sampson said African descendants globally, including those in Guyana, face similar plights and the business outreach is aimed at assisting them to surmount those challenges, especially in this instance their economic condition. “That is so and it is so globally and that is why the United Nations has addressed this through this decade and so we can look at where we are and we are in exactly the same situation so this is an attempt to address that and to correct the imbalances in terms of access to information and access to resources,” the IDPADA-G official said.

Granger has asked African Guyanese organisations to come together to focus on economic, employment and education issues.

IDPADA-G said the “major one stop economic assistance event aimed at improving the lot of hundreds of micro, small and medium scale enterprises in Region Four.”

“It will give African Guyanese business persons and opportunity to come face-to-face with key service providers, key ministries  that impinge on their work. They need to be aware of not only the resources that are available at their disposal but also the regulations that guide business functions in the society and that information is not always readily available,” Sampson added.

Similar conference will be held in Linden at the LEN Building on Saturday July 28th and in Courantyne at the Rose Hall Youth and Sports Club on August 8th.

The one stop shop will allow business owners to get guidance and assistance from representatives of commercial banks, agencies like the Small Business Bureau, IPED, the New Building Society, the National Insurance Scheme (NIS), the Guyana Revenue Authority (GRA), Credit Info Guyana, the Deeds and Commercial Registries, several government ministries and other agencies.

IDPADA-G says over a dozen agencies have confirmed their participation and several Government ministers have signaled plans to attend the event aimed primarily at bringing the services of state and private enterprises directly to end users. Many small business owners have been vocal about the difficulty of accessing credit to grow their businesses and others are unaware of how to register and start up a business formally.

The various agencies will have their own booths or desks to render direct assistance to attendees.

The event is being organized by the International Decade for People of African Descent Assembly, Guyana. Other supporting organizations include the African Business Roundtable (ABR) and the Nile Valley Economic Community (NIVALECOM).