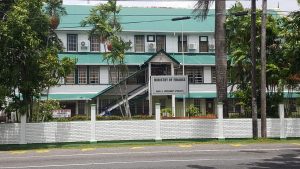 The policy framework for Guyana’s proposed Sovereign Wealth Fund (SWF) is to be laid in the National Assembly in the coming days, to make way for eventual tabling of legislation that will provide for the involvement of the opposition in managing the expected huge windfall of oil revenues, Finance Minister Winston Jordan said.

Experts forecast that Guyana will earn as much as US$380 million annually from royalties in the first three years of oil production beginning in 2020 at 120,000 barrels per day from Liza Phase One.  Based on seven other oil discoveries offshore Guyana, ExxonMobil forecasts daily production at 500,000 barrels in another five years.

Jordan said a number of Commonwealth consultants have already made a “lengthy presentation” on the SWF and a more than 40-page Green Paper would be tabled in the National Assembly before Parliament goes into its two month recess.  The legislation, he added, is expected to be tabled in the House when Parliament resumes in October.

Government, he said, still has  to decide on the fiscal rule that would govern withdrawals from the SWF in keeping with set benchmarks.

Asked why should Guyanese pay attention to the Green Paper, he said it would outline “government’s thinking on what they will be doing with the money, not whether they will be building roads and so on but the general construct that we are not about to go frittering away the money but essentially this money will be well-kept, well-invested and well-used” for saving for the future, stabilisation and national development for transformative projects.

Features of the SWF Green Paper include measures to avoid the resource curse and Dutch Disease, as well as the  structure, management, accounting and audit of the fund, and commitment to the Santiago Principles of good governance, transparency and accountability.

Reflecting on the origin of the Green Paper that was developed locally and then  refined with assistance from international development partners,. the Finance Minister said the SWF legislation had been drafted before the policy document.

The Finance Minister said in response to observations by the International Monetary Fund, provision has now been made for the reporting mechanism. “That is now being taken care of in the legislation,” he said.

ExxonMobil announced Guyana’s first commercially viable oil discovery in May, 2015 and since then it has found other huge deposits of high quality oil.