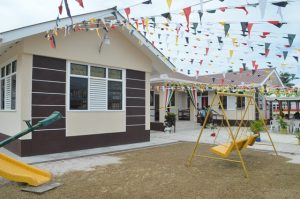 The commissioning of Early Childhood Development Centres (ECDC) in Ann’s Grove and Ithaca reflects the government’s commitment to facilitating the growth of entrepreneurs.

Minister of Finance, Winston Jordan on Saturday commissioned the centres in Ann’s Grove, East Coast Demerara and Ithaca, Region Five. The minister said, having a safe, educational space for children provides parents with an opportunity to become their own bosses.

“We want people exposed so that they can empower themselves and not keep looking to the government for handouts or jobs,” Minister Jordan was quoted by government’s Department of Public Information as saying.

The centres will provide educational services to ninety children; infants to school-aged children up to five years. It also creates employment for 16 young people in the area. The 3,200 square foot facilities will accommodate, eight caregivers/teachers and an administrator. 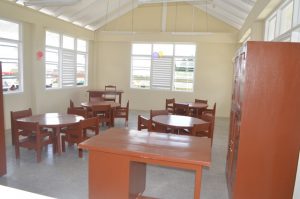 Inside a section of the Ithaca Early Childhood Development Centre (ECDC)

Each facility includes four care areas/classrooms, a sleeping area, sickbay, a staffroom, an administrative area, storage spaces, a kitchenette, a laundry room, sanitary facilities, and an outdoor play area for the children.

The centres were made possible through a collaborative effort between the Basic Needs Trust Fund (BNTF) and the Office of Presidential Advisor on Youth Empowerment Unit (PAYEU).

BNTF also trained sixteen young women as early childhood educators earlier this year. Three young women from Ann’s Grove and two from Ithaca will receive scholarships to attend the University of Guyana (UG) and receive their Level One certification in Early Childhood Development.

Aliya Kudrutullah, a Blairmount resident, is a recipient of the scholarship. “I am lucky to be working at this new facility because we were well trained and it will be a new working experience for me,” she said.

Kudrutullah added, the ECDC is an opportunity for unemployed mothers in the community to leave their children “in good hands.” 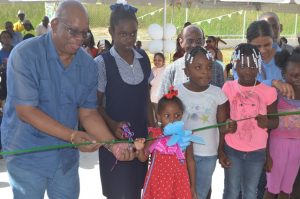 Minister Jordan and children of Ithaca cut the ribbon to commission the ECDC.

Gail Hunter is one of the women employed to work as a caregiver at the Ann’s Grove ECDC. She is also a mother. “It will give us a chance to go out and work and develop ourselves so that we can provide for our children,” she said, adding that she looks forward to moulding the minds of the young children in her community.

BNTF is the flagship development programme under the Caribbean Development Bank (CDB) and the government. Over the last 25 years, the BNTF Guyana office has been working to address poverty reduction by providing access to basic infrastructure and services in rural and urban communities.