Man arrested for allegedly impregnating 14 year old girl, after he attempted to flee to Georgetown 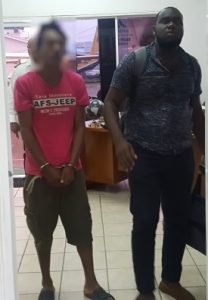 The handcuffed rape accused being escorted by a Guyana Police Force detective on their arrival at the Eugene F. Correia ‘Ogle’ Airport.

A man, who attempted to abandon a 14 year old girl he allegedly impregnated, was Monday arrested and flown to Georgetown along with the girl and her parents.

The visibly pregnant teenager was taken into the care of Guyana’s Ministry of Social Protection’s Child Care and Protection Agency.

Roraima Airways pilot, Captain Learie Barclay said he called in the police after the girl boarded plane at Baramita airstrip on Tuesday, in an effort to accompany the suspect who said he is 25 years old.

The man is said to have told the girl that he would be returning and would be taking care of the baby, but she did not believe him and insisted on boarding the plane to accompany him to Georgetown. The pilot said he urged the man to resolve their disagreement.

She was  not booked to travel to the City.

After the girl said she was 14 years, a policeman who was standing nearby at the airstrip was asked to immediately investigate a report of rape. Police arrested the man, took the girl into protective custody and subsequently detained the girl’s parents.

She and her parents live at a gold mining area, North West District where it is alleged the sexual offence was committed.