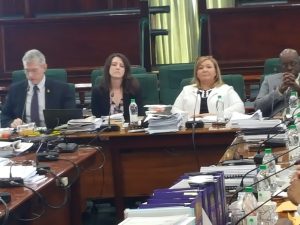 ExxonMobil’s Guyana Country Manager, Rod Henson on Friday declared that his company was not funding local political parties, and he was asked to withdraw description of a line of questioning by an opposition representative as “hogwash”.

Appearing before a bi-partisan parliamentary committee on Natural Resources, Henson was asked by opposition member Pauline Sukhai whether the United States (US) oil giant was funding a “political initiative” in the name of government’s Green State Development State Development Strategy which was not tabled in the National Assembly as yet.

“The Green State Development Strategy is not in its totality or comprehensively documented and consulted upon as yet. In fact, that strategy has not even reached the Parliament for its debate or for its approval or to be laid as government’s main focal point strategy,” she said. “There is a line of thought out in the public that ExxonMobil is actually funding a political initiative that is not yet established and approved by the National Assembly and that is, as I mentioned before, the Green State Development Strategy,” she added.

Responding, Henson stated categorically that the United States-based oil giant was not engaged in politics. “Sorry M’am but I have to stop you. ExxonMobil is not involved in politics in Guyana. We don’t choose sides. We’re apolitical and we are not funding any political party, any political side, any political initiatives,” he said.

Henson said he was grateful for the opportunity provided by Sukhai to respond to the claims that he called “complete hogwash”, a remark that he later withdrew at the request of the Committee Chairman, Odinga Lumumba.

“A true partner will not consider questions such as mine ‘hogwash’ or any other way but it’s a matter of us serving our purpose,” said Sukhai of the opposition People’s Progressive Party.

“I withdraw the word ‘hogwash’ and I want to make it clear that ExxonMobil is not a political entity that provides financial or other support to political parties here,” Henson said when asked by Lumumba. Government member of the Committee, Jermaine Figueira said, “thank you for making that pellucid”

Government member of the National Resources Committee, Ronald Bulkan later stated that the Green State Development Strategy is “not a political initiative, it is a government initiative”.

Opposition member of the Committee, Neend ‘Neil’ Kumar remarked that the Low Carbon Development Strategy (LCDS) “came to the parliament and was discussed.”

The LCDS was crafted by the then PPP-led administration.

The ExxonMobil Country Manager said he attended the parliamentary committee prepared to focus on local content.

He highlighted that 227 companies accounted for the injection of US$21 million into Guyana’s economy during the first quarter of 2018.