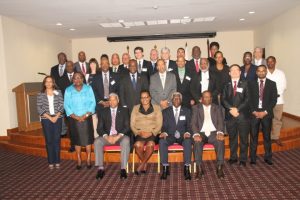 “Usually, those standards are much higher than what the ICAO would have put out…I am wondering if the time is not right for the Caribbean Community to have its own civil aviation authority where all the Caribbean states will issue licences to say ‘you are a Caribbean Aviation Authority engineer or pilot even though that licence would have been issued in one of the States’ but it’s a CAA licence,” he said.

He queried what would be the requirements for the CAA to be accredited by the UKCAA, FAA and European Civil Aviation Safety Agency to allow for the regionally issued licences are “good anywhere in the world”. 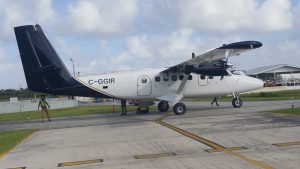 The Twin Otter that is owned by Aurora Gold Mines.

London’s suggestion came against the background of recent concerns about a Canadian crew flying a Canadian-registered plane that is owned by Guyana Goldfields/ Aurora Gold Mines (AGM). The company has assured that three local pilots were hired and two local pilots are in the final stages of their re-certification process to enable them to be fully certified Twin Otter pilots “and will continue to advance their aviation career with AGM.”

He said such an approach would, for instance, allow Guyanese pilots to fly Canadian-registered aircraft in Guyana instead of hiring foreign pilots who have to be retrained in Canada to be retrained or re-certified before he is accepted on that plane. He called on participants of the CASSOS meeting to examine what are the options available in the Multilateral Air Services Agreement (MASA). 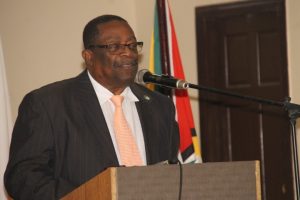 London, a former Guyana Defence Force pilot, expressed concern that the Caribbean appeared to be churning out maintenance and operation crews who then leave and work outside internationally, causing Caribbean nations to train fresh groups of personnel.

“I am wondering whether we are not shooting ourselves in the foot by not taking stock if what has been happening and taking corrective action,” he said.

The GCAA noted that the MASA allows for recognition of certification among a number of Civil Aviation regulatory agencies in the region, but the time has come to have them recognised by international counterparts.

CASSOS describes itself a Regional Safety Oversight Organisation (RSOO) that aims at facilitating the growth and development of aviation in the region through training, resource sharing, harmonization of policies and procedures among other areas as its Member States seek to uphold the highest standards of safety and security in aviation.