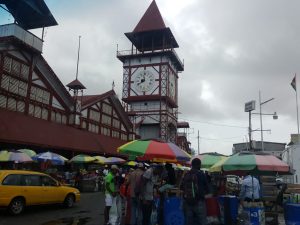 Bandits broke into the well-known Guyanese jewellery store, L. Seepersaud Maraj in the Stabroek Market, and carted off a large quantity of jewellery, leaving the proprietors baffled.

Mr. Maraj told Demerara Waves Online News that he could not immediately estimate his losses until he goes through his stock records, but they are certainly less than GY$100 million.

“Sometime last (Monday) night or so they came into the safe. I am surprised because it took then a very long time-five hours minimum hours- because they broke into  multiple security doors in the vault,” Maraj told Demerara Waves Online News.

Crime Chief, Assistant Commissioner of Police, Paul Williams told Demerara Waves Online News that no one has been arrested, but investigators were seeking to ascertain who have access to the market after business hours. There were no signs of a break-in at the Stabroek market itself.

Police have so far learnt that the southern gate is accessible by the City Constabulary.

Williams, who visited the scene with a team of investigators from the Major Crimes Unit, said no one has been arrested or detained for questioning. No surveillance video recordings have been obtained.

The Crime Chief said the thieves might have gained entry to the stall by cutting a padlock before blow-torching the locks om the vault.

Police have not yet obtained results from fingerprints captured from the scene.