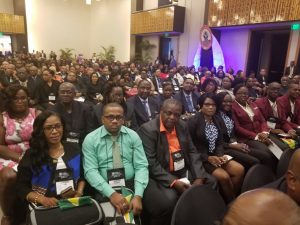 A number of Guyanese credit unionists including several from the Guyana Public Service Cooperative Credit Union at Caribbean Confederation of Credit Unions’ 61st Annual International Convention held in Port-of-Spain from June 15 to 20, 2018.

When the original Management Committee of the Guyana Public Service Cooperative Credit Union (GPSCUU) was granted an interim order by the High Court on June 19, 2018, a number of payments, including a multi-million dollar pay-out to a lawyer, were made from the financial organisation’s coffers.

Records seen by Demerara Waves Online News show that a prominent attorney-at-law signed a payment voucher as having received GY$3.5 million as payment on June 25, 2018 as per invoice in keeping with a decision of the Committee of Management on June 24, 2018.

An invoice dated June 25, 2018 was stamp-dated June 25, 2018 as having been paid for 12 aspects of legal research, preparation and representation in connection with Credit Union Chairman Patricia Went, Trevor Benn and the Chief Cooperatives Development Officer, Perlina Gifth. That invoice, signed by the lawyer, is for the amount of GY$8 million plus 14 percent Value Added Tax  of GY$1,120,000.

Benn-who Gifth says in Court papers ceased to be Secretary/Manager of the Committee of Management on May 25, 2018 when she issued him a letter, taking over the Credit Union on behalf of government-also  signed a Republic Bank cheque number 000018533 dated June 26, 2018 payable to Patrick Yarde for GY$381,750. That cheque was apparently not uplifted.

Before High Court Judge, Gino Persaud struck out a number of previously issued orders in favour of Went and other members of the then Committee of Management, Benn on June 25, 2018 had written to government’s Chief Cooperatives Development Officer warning her against disclosing the Credit Union’s documents, files or monies to anyone because a previous High Court order had relinquished her control of the financial organisation.

“Please be advised that should you fail to properly account for the funds and should any such data, files, documents, records and/or information uplifted, garnered and/or obtained and stored via email, flash drives, disks and other digital media and/or photocopies, notes or systems be furnished to any third party or used in any manner that  may constitute a breach of the extant court order , breach of GPSCUU confidentiality or designed to cause harm or injury to GPSCCU Ltd. or any of its members and/or manipulation or processes within the GPSCCU Ltd. legal action would ensue,” Benn told Gifth.

In an affidavit in the latest in a string of legal battles in one month over who should have control of the Credit Union, Gifth said no Annual General Meeting was held since 2010 and no dividends were paid since then because the Management Committee had failed to sign audited accounts that had been adjusted by Chartered Accountant Maurice Solomon at her request.

The Chief Cooperatives Development Officer recalled having moved to have the Credit Union’s accounts at Republic Bank and Scotiabank temporarily frozen until the bank was informed of new signatories so that the union’s business could continue.

Gifth said neither Went nor Benn had the authority to seek legal redress on behalf of the Credit Union.

Gifth said she authorised George Vaughn to conduct a 100 percent audit of the Credit union’s books because it was observed that over a number of years GY$32 million were withdrawn for travelling expenses but there were no accompanying vouchers.

Also observed, according to the Chief Cooperatives Development Officer, was that a member had received GY$1 million to act as a negotiator: members of the Committee of Management were also staff members and collected two salaries and stipends; gigantic salaries were being collected by the Manager and Accountant since they received the 22 percent gratuity on their salaries each month, and US$26,000 were discovered in a drawer in the GPSCCU office which is in breach of the financial rules. Gifth added that the discovery was documented and videotaped by police from the Brickdam Police Station.

The Chief Cooperatives Development Officer said since May 25, 2018 it was observed that the weekly transactions of the union  amounted to approximately 400 cheque transactions.

Justice Gino Persaud on Tuesday ordered the discharge of interim orders dated June 19, 2018, that an affidavit in defence be filed by July 10, 2018; skeletal submissions be filed by July 24, 2018 and the matter be adjourned until August 2, 2018.