No threatening levels of mercury found at GGMC – PAHO/WHO team 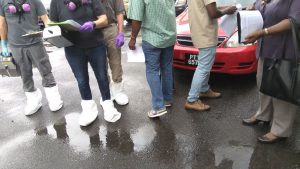 The PAHO experts at the GGMC compound checking for traces of mercury following a clean-up exercise several weeks ago.

“The team did say though they are not here to certify that necessarily but they did say that they found that the levels at the GGMC compound and its environs were below any threatening level. That I believe is a testament that the job was very well done,” Minister Trotman was quoted by government’s Department of Public Information as saying.

The international team of experts visited Guyana last week and, among other things, assessed the mercury clean-up efforts at the Guyana Geology and Mines Commission (GGMC) Brickdam complex.

The team comprised of two industrial hygienists, two physicians and a mining engineer and was headed by Industrial Hygienist and head of the team, Catherine Beecham.

The team visited Guyana following mercury exposure crisis at the complex. The Guyana Gold Board ceased the burning of gold at the GGMC complex in April following health and safety concerns. The GGB is currently sourcing alternative facilities to conduct its exercises.

Minister Trotman noted the recent mercury exposure situation at the GGMC complex is an opportunity to improve how the mining industry utilises mercury.

The Ministry of Public Health will soon pronounce on the findings of the PAHO/WHO team.