UNICEF Representative, Sylvie Fouet (left) hands over a copy of the “National Policy- Reintegration of Adolescent Mothers into the Formal Education System” to Minister of Education, Nicolette Henry.

Government-run schools will no longer be allowed to shun adolescent mothers and will, instead, be required to abide by a policy that provides for their reintegration into the school system to continue studies, Minister of Education Nicolette Henry said.

“Policies are not optional so if you do get an opportunity to go through the policy, you would see that it speaks to what would be implemented throughout the Ministry of Education. It has to be implemented at every school that is applicable,” she said when asked by Demerara Waves Online News.

She hinted that, while the Ministry of Education could not enforce its rules on private schools, they need government’s permission to keep their doors open. “Given that we have the responsibility to provide them with permits to operate, we as far as possible ensure that they are in compliance with the values, policies, rules and regulations of the Ministry of Education so there is that mechanism that is in place,” the Minister said.

The policy aims to ensure that adolescent mothers are able to continue their education in the same school or another school at least six weeks after delivery. “This is critical as it will also enable Guyana to achieve the elusive goal regarding gender equality,” states the 56-page document.

Chief Education Officer, Marcel Hutson stressed that the policy was also aimed at preventing teenage pregnancy. “The goal of this policy is to advance the prevention of adolescent pregnancy and the management of integration of adolescent mothers into the formal school system. And, I said prevention because I don’t want us to leave here believing that this policy is just designed to offer a way to those persons who become pregnant as teenagers but it also attempts to prevent persons from becoming pregnant which means that a component of this policy has to do with teaching,” he said. The policy provides for heightened Health and Family Life Education.

Henry was confident that Headteachers would not refuse to implement the “National Policy for the Reintegration of Adolescent Mothers into the Formal School System” which was drafted by the Ministry of Education in collaboration with the United Nations Children’s Fund (UNICEF). 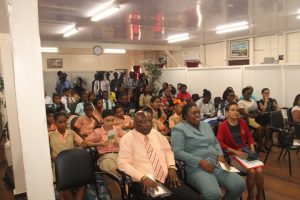 A section of attendees at the handing over ceremony for National Policy- Reintegration of Adolescent Mothers into the Formal Education System. The event was held at the National Centre for Educational Resource Development.

The Minister was asked whether the policy would be compulsory because research for the formulation of that said policy states that pregnant girls were not allowed to continue their education. “In the absence of this policy, school administrators across the country continue to utilise different approaches to address adolescent pregnancy. In most instances, these school girls are either expelled or forced to drop out of school upon detection; a decision that brings to an immediate end their formal education,” the document states, a situation that was labelled discrimination against adolescent girls in education.

Statistics show that Guyana has the second highest rate of adolescent teenage pregnancy among girls between 15 and 19 years old in the Caribbean and South America. The percentage of adolescent pregnancy is between 20 to 22 percent for girls below the age of 19 years and has remained constant at one percent for girls under 15 years, Fouet said in referring to statistics from Guyana’s Ministry of Public Health.

Speaking with reporters after receiving a copy of the document from UNICEF Representative in Guyana, Sylvie Fouet, the Minister of Education said teachers would first be trained about the policy. “I rather suspect that in most instances where there is resistance, it has to do with the lack of a knowledge and so in this particular instance we certainly, as part of the policy, speaks to training people,” she said.

The implementation and monitoring of the policy requires the Ministry of Education to engage in continuous public education and awareness programmes through the media and focus groups to target parents, community groups and adolescent boys and girls. Teachers, students and general school staff are to be sensitised to the needs of pregnant adolescent girls. The policy also calls for an effective tracking system to capture regular progress reports on school attendance, performance and challenges. Officers of the Ministry of Education are to keep track of adolescent mothers and to ensure effective policy implementation. Counselling and psycho-social support services, post-natal services and daycare systems, and convening of parenting sessions and family support groups are also provided for in the policy.

In her message, Fouet said adolescent fathers would also be targeted. “The policy will also adolescent boys who are fathers to be engaged and to be encouraged to complete school and to take up their responsibilities,” she said.