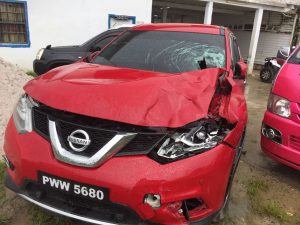 The vehicle that was driven by Lieutenant (Coast Guard) Eson Trim

The Guyana Defence Force (GDF) confirmed that a senior military officer struck down a pedestrian and killed him Sunday night.

Lieutenant (Coast Guard) Eson Trim is “currently assisting the police with their investigations” into an alleged fatal accident which resulted in the death of 35-year Roopchand Ramkellowan, the army said.

The Guyana Police Force said the 28-year old member of the Joint Services, who resides at South Ruimveldt, was under the influence of alcohol at the time of the accident. “A breathalyzer test revealed that his breath alcohol level was above the legal limit,” police said.

The accident occurred at De Willem Public Road, West Coast Demerara. The GDF said its Chief of Staff, Brigadier Patrick West, officers and ranks “regret this unfortunate incident and extend our sincerest condolences to the family and friends of the deceased.” 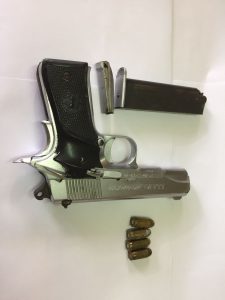 The gun and ammunition that police said Roopchand Ramkellowan was carrying when he died in a road accident at De Willem, West Coast Demerara.

Police said at about 10 PM Saturday, a motor car  bearing licence plate,PWW5680 and driven by a 28-year-old member of the joint Services hit  Ramkellowan.

“Investigations revealed that the victim was crossing the road from south to north when he was struck by the motor car which was proceeding east along the northern carriageway. The pedestrian was rushed to the Leonora Cottage Hospital in an unconscious state and was pronounced dead on arrival,” the police force said.