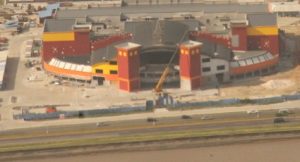 The Guyana Revenue Authority (GRA) on Sunday denied that it was responsible for  the delay in the opening of the US$40 million MovieTowne because equipment and seating were at wharves for weeks awaiting “simple signatures”.

Commissioner-General of the GRA, Godfrey Statia, said while guided by the rules of confidentiality, the tax agency must set the record straight. “There were no delays on GRA’s part,” the GRA boss stated.

He noted that before MovieTowne was granted an Investment Development Agreement in December 2017, the GRA facilitated MovieTowne with a Prior to Processing (PTP) arrangement on November 19, 2017, to allow Movietowne to clear its goods. “Movietowne’s container arrived at the wharf on October 21, 2017 and was uplifted on November 28, 2017, after the grant of the PTP,” Statia said. He added that MovieTowne waited until the container was at the wharf to apply for the concessions and to submit an incomplete IDA.

The IDA, which was eventually granted on December 29, 2017 by Finance Minister Winston Jordan after all outstanding requirements had been submitted, allows for the imports and waiver of duty and Value Added Tax on the amount of GY$1.073 billion. But by that time, the GRA said it had already facilitated the clearance of Movietowne’s goods through the PTP process.

The GRA said it also advised the principal that equipment used in the construction of Movietowne was in breach of the terms of an IDA under which equipment that was earmarked for another major project was being utilised in its construction.

Statia said despite that breach, the GRA agreed that only after the MovieTowne project is completed would the tax agency “proceed with the available remedies of the said breach.”