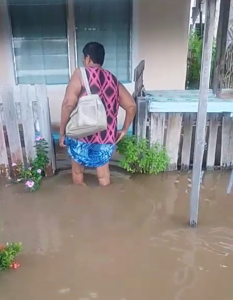 The managers of a mosque and at least 12 residents at Wakenaam Island want a river defence contractor to compensate them for damage and destruction caused by a flood due to poor quality works, officials said Sunday night.

Chairman of the Neighbourhood Democratic Council at Wakenaam, Sheik Ahmad told Demerara Waves Online News that the Sea Defence Board, Region Three administration  would be working with affected residents to tally their losses and send them to the Ministry of Public Infrastructure to seek compensation.

Insisting that the flood was caused by sub-standard work done by a contracting company hired to build a rip-rap river defence, Ahmad said 12 residents and the mosque’s management want to be compensated. “We have some contractors coming and doing the same thing at Wakenaam so somebody has to be an example somewhere along the line,” he added. At least 37 other residents suffered minor losses.

The NDC Chairman said 50 X 50 square feet of high quality carpets at the mosque have been damaged and the cost of replacement us estimated at GY$1.5 million.

The Director-General of the Civil Defence Commission (CDC), Lt.Col. Kester Craig added that the NDC and Region Three Democratic Council  “will be doing more detailed assessment and will be working with the contractor to see if an agreement can be reached as it relates to compensation for the residents that were affected, especially the worst affected”.  Craig said the CDC conducted a rapid damage assessment to get a overview and extent of the damage.

Government’s Department of Public Information quoted the Region Three Executive Officer, Denis Jaikaran as saying that the contractor should stand the full cost of compensation for conducting substandard work.

Ahmad said the breach was sealed Sunday and since then there has been no more flood. “We have seen no water coming over the walls or any breach and they will be coming back here to do their work,” he said, adding that by 2 PM Sunday all the water drained into the river due to good drainage facilities.

The CDC Chief said all affected residents were given cleaning and hygiene supplies to help with cleaning and minimise the chances of water borne diseases .