Policemen among several arrested after unlicensed gun found nearby 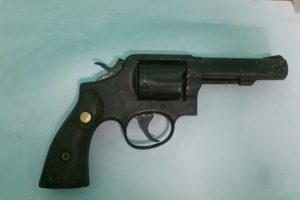 The revolver that police said was found near seven men, including two policemen, who were arrested Friday night at Onderneeming, West Bank Demerara.

Two policekmen were among seven persons arrested after a handgun was found near the area where they were gambling, the Guyana Police Force said in a statement.

One of the two lawmen, the force said, has been interdicted from duty and is reportedly renting a ‘mobile outlet’ at Onderneeming, West Bank Demerara where the arrests took place.

The law enforcement agency said at about 9:45 PM; the men were arrested after one .38 revolver with a spent shell in its chamber was found near them.

“It was alleged that the suspects along with others who escaped, were engaged in a game of chance when the patrol approached,” the police force said. 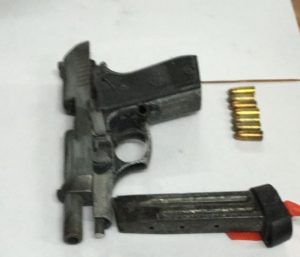 Police said they found this handgun and bullets in the possession of a known character.

Ballistic tests, police said, would  conducted to determine if the weapon was used in committing any crimes.