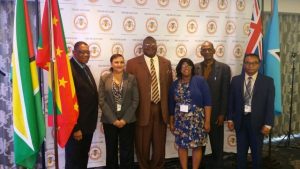 Guyana’s Integrity Commission is among several other similar bodies in the Caribbean that have called on the 15-nation Caribbean Community (CARICOM) to put  graft and corruption on their agenda and craft Commissioner harmonised legislation to tackle the scourge.

“Must encourage CARICOM to place on its Agenda the discussion of anti-corruption efforts,” states the communique issued at the end of the meeting that was held in the Turks and Caicos Islands from June 4 to 8, 2018.

The CCAICACB urged Integrity Commissions and Anti-Corruption Bodies to make recommendations to their Governments with a view to realizing reinvigorated political will, public sector and nationwide commitments, to continuously combat corruption.

The delegates also called on Caribbean governments to provide adequate financial, technical and human resources to the Integrity Commissions and Anti-Corruption Bodies and encourage and support them to promptly and efficiently discharge their statutory functions in their sustainable fight against and in the eradication of corruption.

Guyana was represented at the meeting by Chairman of the Integrity Commission, former Judge, Kumar Doraisami and Attorney-at-Law, Rosemary Benjamin-Noble.

If they get their way, those anti-corruption bodies might soon be sharing “information and lists of persons of interest among themselves” through harmonised strategies and practices for strengthening cooperation and the sharing of data. As part of efforts to galvanise support and confidence, the conference agreed to conduct outreaches to youths, civil society and other interest groups as well as provide hard data on the real impact of corruption to the wider public. “Urge the Integrity Commissions and Anti-Corruption Bodies to secure at national and regional levels, statistical information on the real cost of corruption and make the information available to the ordinary person,” the communique states.

Executive Director of the National Integrity Action, Jamaica, Trevor Munroe said ordinary people are critical stakeholders in the fight against corruption because they are the ones who often complain about low wages and no jobs. “Every single Caribbean citizen save the corrupt minority; every unemployed and underemployed Caribbean person, particularly our youth, every underpaid, self- employed person, all who justifiably complain that their incomes do not allow them to make two ends meet, has an interest in reducing and ultimately eliminating the real costs of corruption thereby significantly improving the conditions of our people.”

He noted that surveys have shown that although successful prosecution and imprisonment of the corrupt is indispensable ingredient of getting more people involved in the fight against corruption, surveys  have revealed “that many people don’t get involved because they believe that nothing will happen and, therefore, the risk of being victimised as a result of reporting is not worth it.”

A news release issued at the end of the conference stated that it was estimated that the level of corruption in Caribbean countries could be in the vicinity of 30% of their respective Gross Domestic Products. The most recent Transparency Index showed that among the Caribbean countries Barbados was rated the highest at 68 out of a possible 100 points, while Guyana scored 38 – which was a significant improvement from the last rating that was published.

In the area of legislation, the Commonwealth Caribbean anti-corruption actors cited the need for common legislation that takes into consideration the United Nations Convention Against Corruption (UNCAC). “Continue to pursue the development and implementation of regional anti-corruption model legislation in keeping with the requirements of the UNCAC and the constitutional and legislative frameworks of their respective countries, to achieve effective reduction and eradication of corruption in the Commonwealth Caribbean,” states the communique.

With a number of Caribbean governments having over the years condemned or ignored the corruption perception rankings by Transparency International, the CCAICACB called on governments to heed observations made by bodies on perceived graft and corruption. “Must encourage Governments, Integrity Commissions and Anti-Corruption
Bodies to acknowledge corruption perception indices, and engage independent integrity agencies to work regionally to determine strengths and challenges so that the Association can share more objective corruption indicators and recommendations for improving the fight against corruption across the region,” the delegates said at the end of their conference in that British dependency.

The participants agreed to take up an offer by Grenada to provide facilities for capacity building programmes of the Association, in collaboration with India and the Commonwealth Secretariat as well as accept the tentative offer of Cayman Islands to host the next Conference in 2019.

Representatives of  three other Commonwealth Caribbean countries at the conference were also Guyanese.
Chairman of the TCI Local Organizing Conference Committee was Canon Mark Kendall – Anglican Priest, and Commissioner of the TCI Integrity Commission. Lady Anande Trotman-Joseph represented Grenada. She is the wife of Sir Lawrence Joseph – who acts as Governor General of Grenada from time to time. Lady Trotman Joseph is an Attorney-at-Law and Chairman of the Grenada Integrity Commission. The Grenada delegation included another Guyanese –Bertie Sylvester Hill, formerly of West Bank Demerara, who has been a Commissioner in Grenada since 2010. As Chairman of their Integrity Commission – Pastor Sherwin Griffith headed the delegation from St Lucia. Pastor Griffith was a teacher at various High Schools and a lecturer at the University of Guyana before migrating to St Lucia. He has lived there for 28 years and is a senior pastor of the Wesleyan Holiness Churches. Bishops’ High school in Guyana is the alma mater of Lady Anande Trotman-Joseph, Mrs Rosemary Benjamin and Canon Mark Kendall.