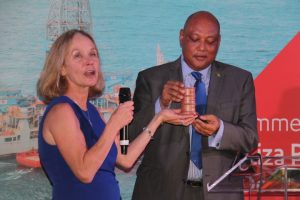 ExxonMobil on Tuesday reconfirmed that Guyana will pump up its first barrel of oil in March 2020, even as the Guyana government continued to fend off criticisms of the 2016 production sharing agreement.

Vice President of ExxonMobil Development Company, Lisa Walters said work was well advanced by several companies in Singapore, Brazil and the United States Gulf Coast to ensure that commercial oil production begins in less than two years. “We are on track for first oil in March of 2020,” she said. “In just a little over a year and a half, the Liza Destiny will deliver its first oil to its first tanker offshore,” she added.

Walters said the drill-ship, Noble Bob Douglas, recently started drilling the production wells located at Liza more than 125 miles off the Demerara Coast. She said “all of the design work on the project is nearing completion” and “construction is well-underway worldwide” for the Floating Storage, Production, Storage and Offloading (FPSO) vessel named “Liza Destiny”. SBM Offshore has won the contract to construct that vessel, while TechnicFMC, and Saipem have been hired for sub-sea construction of the umbilical cords and flow-lines. Guyana Shorebase Inc was awarded the contract in June, 2017 for shore-base services and in August, 2017 the Noble Bob Douglas was hired for drilling services.

ExxonMobil’s Country Manager, Rod Henson also used the opportunity of the official start of the Liza Phase 1 Development Programme to show off that in the first quarter of 2018, over US$14 million were spent with Guyanese suppliers; together with its contractors  ExxonMobil utilized 262 Guyanese registered suppliers, 227 of which are Guyanese owned.

Minister of Natural Resources, Raphael Trotman reiterated that the revised ExxonMobil Production Sharing Agreement has  “the same or very similar contractual terms” as those Guyana has signed with other companies such as Anadarko Petroleum, Ratio, CGX, REPSOL, Ratio, Eco-Atlantic and Mid Atlantic.

“In that regard, they will enjoy the same rights and obligations as every other company that has been contracted by the government to explore and develop our hydrocarbons.

That they were the first to find a large deposit should no redefine their contractual terms or place them in any position less than that enjoyed prior to discovery. For government to do otherwise is not how responsible or how well-organised and governed States function,” she said.

The Minister of Natural Resources said the proceeds of Guyana’s oil production would be fairly shared among all Guyanese without discrimination as part of a process that would eventually lead to the removal of negative labels such as Third World, backwards, underdeveloped and developing from Guyana. “With the blessings that have been
revealed, and are within our grasp, we purpose to develop a modern, peaceful and cohesive State-one in which every man, woman and child, without exception, reservation, and/or discrimination of any kind, is able to enjoy the full and equal benefits of the bounty we are about to be bestowed,” he said.