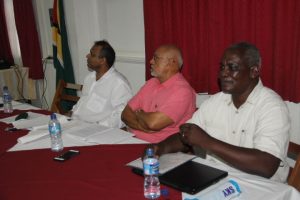 A People’s Progressive Party (PPP) representative on the Guyana Elections Commission (GECOM), Robeson Benn says there are too many Afro-Guyanese employed at that elections management authority, a position echoed by former President Donald Ramotar.

Speaking at a triple-lecture event organised by the Cheddi Jagan Research Centre, Benn said the the “ninety or more percent African Guyanese” at GECOM does not augur well for confidence and transparency in the electoral process.

Benn said the GECOM Chairman recently became upset with him and tried to stop him four times from speaking during a meeting with a visiting United Nations team. “I said if one group dominates this institution, it cannot be anything but racist or reflexively racist. They may not even know that they are doing something that is racist. It will happen in any event and we do not have the proper diversity in these institutions throughout the whole country,” he said.

The People’s National Congress Reform-dominated A Partnership for National Unity draws the bulk of its political support from Afro-Guyanese and the PPP from East Indians.

The PPP ‘s concerns date back to 2013 when that party had spoken of political and military influence in the General Registrar’s Office and the Guyana Elections Commission. 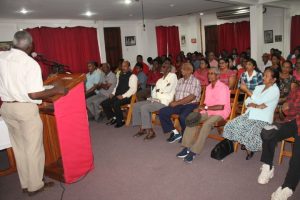 Benn argued that no group, under normal circumstances, should have more than 60 percent dominance in activities of the State and possibly even the private sector. The former Minister of Public Works Minister said Guyana does not have shared activity and balance, and there are long-held perceptions of Africans dominating the civil service and the military, while East Indians have all the land and business.

“It’s fundamentally wrong and it puts us at grave risk even now and perhaps even when elections come just now. Everybody got to share this load,” he said. He remarked that there are views that State is being militarised and “the framework is being it in place perhaps  for things which can happen”.

“It is wrong that we can have such a situation continuing in. We have to have balancing and sharing of all the responsibilities in our country, whether there are economic undertakings or administration and political administration,” said Benn whose father, Brindley Benn had been part of Guyana’s independence struggle through the now opposition PPP.

Former President, Donald Ramotar, during the interactive session, accused the government of discriminatory employment practices. “Look at the dismissal, en masse, of Indian Guyanese from the public service”.

Ramotar also weighed in on what he also regarded as biased employment at GECOM. “Look at what they are trying to do at the Elections Commission. If they say Indians don’t want to join the police force and the army-and I don’t believe that. I think they have gotten fed up now, they have been kept out of it so long that many of them they don’t even try to apply, that because of the pay- GECOM pays well so why aren’t they there so we have to look at some of whom are the forces in the country that are facilitating and keeping thid division,” ge said.

Studies have shown that East Indians are not eager to join the security forces because of low pay, undesirable dietary options and reluctance to be posted to other locations away from their families.

He accused the David Granger-led administration of being just like Burnham government, marked by intolerance to criticism; an example being the proposed Cyber Crime legislation that would outlaw certain types of criticism against the government and the State.

While in government, the PPP had been accused by the PNC and other opposition forces and interest groups of racial discrimination against people of African descent.