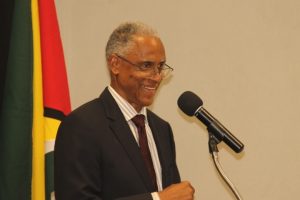 The Caribbean Court of Justice (CCJ) will before July 3 rule on whether Guyana’s presidential term limit is unconstitutional.

President-elect of the CCJ,  Justice Adrian Saunders Thursday night told reporters briefly that the court’s decision  would be handed down before Sir Denis Byron demits office as President of the Court on that date.

Saunders assumes the presidency on July 4.

That decision is widely regarded as key to whether Opposition Leader, Bharrat Jagdeo will be the People’s Progressive Party’s presidential candidate in the 2020 general elections, having been elected President in the 2001 and 2006 elections.

Sir Denis was on the panel of judges who heard arguments by legal teams representing the State of Guyana, and the applicant, Cedric Richardson more than two months ago.

The case reached the CCJ after Guyana’s Court of Appeal, by a 2-1 majority, had upheld the country’s High Court ruling that the two-term presidential limit is unconstitutional.

Then Chancellor of the Judiciary, Carl Singh and then Appellate Judge, B.S. Roy had upheld then Chief Justice, Ian Chang’s ruling that the amendment of the Guyana’s constitution in 2001 to provide for term limits could not have been done by the Parliament. They instead said that such a constitutional change ought to have been done by a referendum.

The dissenting judge was then Justice of Appeal, Yonette Cummings-Edwards. She has since been appointed acting Chancellor of the Judiciary.

The State appealed the Court of Appeal decision to the CCJ which is Guyana’s highest arbiter. The Trinidad-based regional court heard arguments from both sides on March 12, 2018.

In addition to Justices Sir Denis and Saunders, the other judges who heard arguments were Jacob Wit, David Hayton, Winston Anderson, Rajnauth Lee and Denys Barrow.