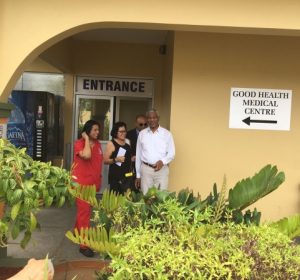 President David Granger and First Lady, Ms. Sandra Granger on Monday completed their first round of medical examinations under a Caribbean medical insurance scheme they have been part of for more than a decade.

The Ministry of the Presidency also said the results from the at the Good Health Medical Centre in Trinidad and Tobago show they are in good health.

“Those results indicate a clean bill of health thus far,” the ministry said, after the First Couple winged out early Sunday morning to the twin-island nation.

The Ministry of the Presidency said Mrs. Granger first joined the scheme 28 years ago as a staff member at the Caribbean Community (CARICOM) Secretariat, and the President, as her spouse, was eligible to participate.

The explanation about the First Couple’s preference to have their annual medical check-ups done in Trinidad, followed some criticism on Social Media and the comments sections of a number of news publications that they should have done their medical examinations locally instead.

The Ministry of the Presidency added that President Granger opted to do those tests in May this year so that he would be in Guyana for the lead up to Local Government Elections, which are due this year.

Granger’s People’s National Congress Reform’s congress where top party executives are elected is also due to be held in August, 2018.