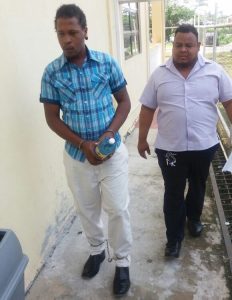 The man, who allegedly killed a man who was in a relationship with his ex partner, was Monday arraigned on a charge of murder.

Arthur is accused of the murder of Claude ‘Sonno’ DeJonge while he and his partner were at his reputed wife’s home, located at 1074 Cinderella City, Mackenzie, Linden.

The Guyana Police Force has already stated that Arthur had shared relationship with Dr Jonge’s reputed wife and he had occasionally visited her home.

Hours prior to the killing, he Holder had visited her and  confronted by the Dr Jonge.  An argument ensued and the suspect left after the police were summoned.

Police had aid about 1 AM Thursday DeJounge and his reputed wife were asleep when they were confronted by the suspect who gained entry via an open window and during another altercation the suspect , who was armed with a knife,  allegedly inflicted the fatal injuries and fled the scene.