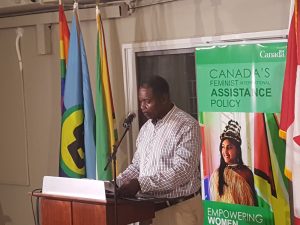 The Guyana Trades Union Congress (GTUC) on Wednesday urged lesbians and gays to use their votes as bargaining chips in elections to get government to scrap discriminatory colonial laws.

“As an organised demographic where you are not only citizens but workers and voters, you’re urged to intensify the use if your power to ensure the structural deficiencies in society and corrected. Those who seek your vote must know support is contingent on moving to eliminate systems that militate against you,” GTUC General Secretary, Lincoln Lewis told a reception to mark International Day Against Homophobia, Transphobia and Biphobia.

Local government elections are expected to be held in November, and general elections in 2020.

Lewis appeared to refer to laws against buggery and cross-dressing which Guyana and several other former British Caribbean colonies still retain on their law-books.

Speaking at the reception that was hosted by the Canadian High Commission, in collaboration with the Society Against Sexual Orientation Discrimination (SASOD), Lewis highlighted that Guyana continues to clutch discriminatory laws that have long been abolished by its former coloniser, Britain. 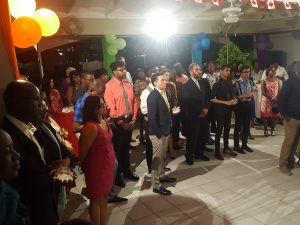 Attendees at the Canadian High Commission-organised reception to mark International Day Against Homophobia, Transphobia and Biphobia.

The lone government minister present at the reception was Minister of Education, Nicolette Henry who is the chair of the Pan-Caribbean Partnership Against HIV/AIDS (PANCAP) Regional Coordinating Mechanism. First Lady, Sandra Granger, who has been vocal on a range of social sector issues, was also in attendance.

The veteran Guyanese trade unionist said several sections of the Criminal Law Offences Act continue to “criminalise conduct” that has elsewhere been “decriminalised among consenting adults consistent with universally acceptable principles” He called on gays and lesbians to intensify their calls for their constitutional rights against discrimination to be upheld. “Your voice must not be still or grow weary until modernity is attained,” he said, and went on to call on employed and self-employed persons to advocate for change or lead the change. 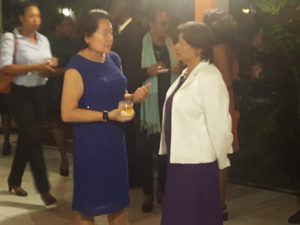 The GTUC General Secretary pointed out that Guyana’s constitution, United Nations Declarations, International Labour Organisation Conventions and other regional and international charters refer to the need to eliminate all forms of discrimination and the rights to freedom of expression and assembly.

Canada’s High Commissioner to Guyana, Lilian Chatterjee said Canada’s Prime Minister Justin Trudeau has apologised for his country’s role in the “systemic oppression, criminalisation against LGBTQ group communities”.  She said Canada understood that countries were “at different stages of acceptance” but no one should forget that human rights are universal and indivisible. “Canada believes that at a minimum all countries should commit to three things: 1- decriminalise same-sex conduct, 2, combat violence and discrimination that target LGBT persons and 3. support the work of LGBT grassroots organisations”

Head of SASOD, Joel Simpson called on those gathered to build on the gains of the past 15 years and press “and continue to be champions in each and every way that we can”.