World Bank selected as “one agency” to prepare Guyana for oil production, natural gas use 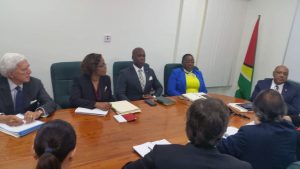 Minister of Natural Resources, Raphael Trotman meeting with the World Bank team at his office on May 15, 2018.

A World Bank- funded energy sector unit in the Ministry of Finance is expected to lay the groundwork for a number of major projects including piping natural gas from an offshore ExxonMobil oil well to the Guyana Power and Light for electricity generation, Natural Resources Minister Raphael Trotman said Tuesday.

He made the disclosure shortly after holding talks with World Bank Country Director for the Caribbean, Tahseen Sayed Khan at Trotman’s Duke Street, Kingston, Georgetown-based office.

The World Bank, according to the Minister, has cited the need for the unit to be established to allow Guyana to get an advance of US$1.7 million of the US$20 million loan. Finance Minister, Winston Jordan has said that money would be used to strengthen the capacity of a number of entities such as the Guyana Revenue Authority, Ministry of Natural Resources, Ministry of Finance, Department of Energy, Bank of Guyana, and Guyana National Bureau of Statistics.

The Minister said assistance from the World Bank and elsewhere would be key to, among other things, accessing and using the natural gas that is associated with commercial oil production. “I know that (Public Infrastructure) Minister Patterson and the Ministry of Public Infrastructure are well engaged with Exxon in bringing the gas to shore so it is very important that we get technical support and advice that is needed from the World Bank and outside of the World Bank,” he added.

The Natural Resources Minister disclosed that government now needed to follow up on desktop studies on moving the gas to the shore, by focusing on the generation and transmission needs of the state-owned Guyana Power and Light Inc. (GPL). “There is a lot of work to get done,” he said, adding that it includes determining the size of the gas pipeline, and which company would be responsible for landing that conduit at Woodlands, East Coast Demerara. “These are decisions that have to be made and they cant be made in a vacuum so we need an in-depth study,” he said.

In April, 2017 Trotman had told a bi-partisan natural resources sector committee hearing that there are about 50 million cubic feet of natural gas per day which could supply a 200 megawatt natural gas energy generating plant and become the solution to Guyana’s energy needs.

Guyana is also getting assistance from the International Monetary Fund in the area of fiscal reforms, fiscal formulas and the proposed Sovereign Wealth Fund whose legislation will be tabled this year for eventual passage after consultations. Government intends to ensure Guyana’s Sovereign Wealth Fund is in line with the Santiago Principles that place a high premium on transparency, good governance, accountability and prudent investment practices.

Against the backdrop of “a flood of offers and support” and proposals to establish a modular refinery for fuel, petrochemicals and fertilizer development as well as a range of advice,  Trotman said it was now important to settle down with one agency- the World Bank.

“We are really receiving too much advice and all of it is well-intended but at some point point and time it became too much. We are a small country…but now that the Ministry of Finance has negotiated this capacity building program with the World Bank we feel a sense of direction and comfort,” he said.

The Commonwealth Secretariat has also assisted Guyana in creating greater awareness in crafting, policies and the  regulatory and legislative frameworks for the oil and gas sector.

The Minister of Natural Resources said the “critical part for Guyana going forward is to transparency and accountability to manage the oil and gas sectors . we look forward to our partnership.”