Man charged with killing over attempt to steal his caged bird 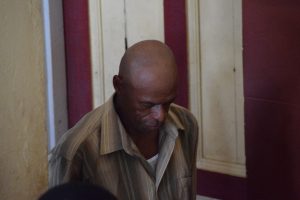 A 56-year old man was Monday granted bail on a charge of killing a man without malice during an attempt to rob him of his caged bird.

Peter Yansen of  134 Block ‘F’ North Sophia is accused of manslaughter committed on Shelton Jordan on May 1.

He was not required to plea to the indictable charge, and he was granted GY$250,000 bail by Chief Magistrate, Ann Mc Lennan. Yansen has to return to court on May 28, 2018.

Defence Lawyer, Latchmie Rahamat, in requesting reasonable bail,  told the court that Yansen was merely defending his property- the caged bird- and during the course of that defence, Jordan died.

Police Prosecutor, Inspector Gordon Mansfield did not oppose the granting of bail, but requested that the court grant conditions such as the lodging of his passport with the Magistrates’ Court office. The court also asked Yansen to report to the Prashad Nagar Police Outpost every Friday until the end of his trial.