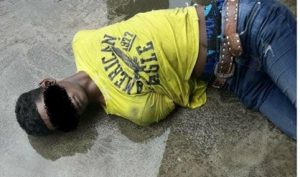 The suspected pirate who was caught Sunday afternoon in Suriname and handed over to police there. (Anthony Janki photo taken from De Ware Tijd)

A  prime suspect, who allegedly confessed to being one of the pirates responsible for the deadly attack off Suriname’s east coast was Sunday morning arrested by fishermen and handed over to police in that former Dutch colony.

Lieutenant Colonel Jerry Slijngard, commander of the Coast Guard, disclosed Sunday afternoon that a suspect has been captured at sea an handed over to the police.

The man is said to be assisting the authorities in the ongoing investigation. Neither his name nor nationality was immediately available.

Slijngard announced that the Coast Guard also captured a fishing boat and crew who couldn’t provide identification and license for their presence in Surinamese waters. They were also handed over to the police.

Meanwhile, Sunday afternoon former president Bharrat Jagdeo will have a meeting with Guyanese fishermen, boat owners and families of the missing fishermen in Nieuw-Amsterdam, Commewijne.

An official Guyanese delegation is also in Suriname for talks with the security authorities.

Five of the 20 fishermen managed to flee the attackers who chopped and beat the other fishers and forced them overboard. Three bodies have so far been recovered by Surinamese authorities. Several Guyanese family members and relatives have since travelled to Suriname to assist with the positive identification of their loved ones by supply identification documents and providing samples for DNA testing.

Guyanese police have also held two persons in Berbice for questioning about the gruesome attack on April 27.