Region One residents get birth certificates 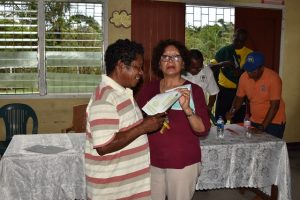 Resident of Sebai, Region One, Basil Williams collecting the birth certificate of his grandson from Minister within the Ministry of Indigenous Peoples’ Affairs, Valerie Garrido-Lowe

Several residents of Sebai, Eclipse Falls and Citrus Grove in Region One uplifted their birth certificates over the weekend, April 28-29; some, for the first time.

A team led by Junior Minister of Indigenous Peoples’ Affairs, Valerie Garrido-Lowe and Region One Member of Parliament (MP), Richard Allen distributed the documents during an outreach in the Barima-Waini region.

The exercise is part of an ongoing operation by the Ministry of Citizenship to ensure every Guyanese is registered and properly documented. It follows a visit conducted by the General Registrar’s Office and guided by MP, Allen to the three communities in February.

Basil Williams, a resident of Sebai, uplifted a birth certificate for his grandson who was never registered prior to this. Williams said, “I am very happy to get this for him because all the time, his mother has been looking forward to this.”
MP Allen said the process will continue until every person in the region is registered. 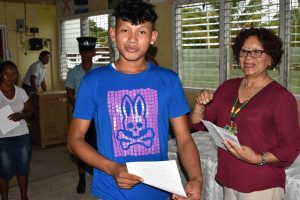 A young resident of Region One receiving his birth certificate from Minister within the Ministry of Indigenous Peoples’ Affairs, Valerie Garrido-Lowe.

The opposition People’s Progressive Party (PPP) had in the past raised concerns about Allen being part of the birth certificate registration and distribution drive.

In response, Minister of Citizenship Winston Felix has assured that Allen has not been interfering in the registration process. The Minister has said that he has asked Allen to assist. “None of the allegations mentioned has any truthfulness behind it… I Winston Gordon Felix, Minister [of] Citizenship has authorised Mr. Allen since last year to mobilise and assist the GRO staff with moving around… MP Allen has not interfered in the work of the GRO staff. He is of help to them,” Felix has been quoted as saying in a Ministry of the Presidency statement.