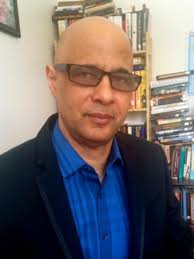 United States-based History Professor, Nigel Westmaas has slammed the sedition clause in Guyana’s Cybercrime Bill, saying it is archaic and that dates back to 1917 when British colonisers had clamped down on freedom of expression by Blacks.

Westmaas, also a former University of Guyana (UG) History lecturer, called for the law to be scrapped altogether instead of being included in new legislation that seeks to punish anyone in modern Guyana who expresses hatred or disaffection for the government of the day. “Now in 2018, we have another iteration of the sedition bill, albeit also designed to suppress free expression in the new social media as against newspapers of old,” he said.

He said the sedition law was enacted to curb Marcus Garvey’s Universal Negro Improvement Association (UNIA) from the time of its foundation in the United States in 1914. Tracing the origin of the Seditious Publications Bill, Westmaas said British Guiana colonial authorities were worried about Garvey’s outreach activity even before the first UNIA branch had been organised on Guyanese soil and which had eventually maintained at least seven functioning groups in then British Guiana.

The historian said the legislation also affected The Crisis, the paper of the American civil rights group, the National Association for the Advancement of Colored People (NAACP) copies of which filtered into the colony. “The vigorous debate and opposition to the Seditious Publications Bill coincided with the rise to public office of non-white middle class politicians and legislators who were slowly overcoming the structural, political and social barriers and seeking political representation in the highest organs of the colony,” he recalled.

The headquarters of the Working People’s Alliance (WPA).

that the offending clause 19 in the Cybercrime Bill is removed. “A century after the 1919 law, a repeat of that law or a variation of it is anachronistic and repressive. Clause 18 of the Cybercrime Bill as tabled in National Assembly should be resisted with the utmost resolve.  It should be removed, period.  In the 21st century we do not need to mimic a law assembled for repression of colonial subjects or citizens,” he said.

The Guyana Press Association, Guyana Human Rights Association, Georgetown Chamber of Commerce and the Guyana Trades Union Congress have in recent days intensified calls for the sedition clause in the Cybercrime Bill to erased. Government has since announced that the Bill would be taken back to Cabinet.

For its part, the WPA, which is part of the governing coalition, echoed Westmaas’ views and called on the David Granger-led administration to not only scrap the offensive section in the Cybercrime Bill, but also to repeal the existing law against sedition. “We urge the government to rescind the law of sedition as it would signal that the state has no intention to resort to oppressive rule in the face of legitimate criticisms from the electorate and note that there are adequate provisions in other acts such as the Racial Hostility Act to treat with the relevant cases that may arise,” that party said.

The party added that a sedition law-a historical legacy of colonialism- has no place in a modern democratic society and should have been abolished since 1966 when Guyana gained independence from Britain. “We cannot be independent if we still use the “tools of the Crown” to silent dissident voices or threaten them to stay silent in the face of authoritarian behavior from those elected to govern. This would be a betrayal of the anti-colonial struggle of the working people of Guyana.”

The WPA expressed disappointment that A Partnership for National Unity+Alliance For Change (APNU+AFC) coalition administration appeared on the verge of breaking one of its electoral promises to guarantee freedom of expression. “This offence has been misused in the past to silence critics of the PPPC government and goes against the present government’s statements on record that it would dispense power in keeping with our Constitution, which guarantees freedom of expression,” the WPA said.

While a section of the Cybercrime Bill appears to allow people to criticise the government, critics of the draft legislation say that  if anyone “brings into hatred or excites or attempts to excite disaffection towards the government established by law in Guyana” is too broad and is open to the widest possible interpretation by the State apparatus.

“In our view political discontent is the cornerstone of democracy and to tamper with it is a denial of individual human rights. Any law which seeks to criminalize free speech or to appear to tamper with it in any form is a blow to the will of the people,” the WPA said.

The History Professor said among those who had spoken out against the Bill had been Guyanese and Caribbeaj trade unionist, Hubert Critchlow and his British Guiana Labour Union, AA Thorne, the East Indian Association, EF Fredericks, and  Dr TT Nichols-he latter two were later involved in the founding of the Negro Progress Convention in 1922. He said even the usually conservative Daily Argosy newspaper had condemned the sedition bill, deeming it in an editorial of the same headline a “Menace to Honest Criticism.”