Lorry driver jailed for causing the death of 12 Berbicians 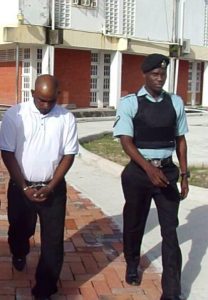 A 42 year old man of Black Bush Polder on Thursday was sentenced to  nine years imprisonment altogether, by Justice Brassington Reynolds at the Berbice Assizes.

He was found guilty by a mixed jury on a 10-2 majority, after causing the death of twelve persons by dangerous driving on the number nineteen Main Road, East Coast Berbice (ECB), on October 29, 2010.

Chaitram Moonsammy was driving a lorry GLL 8863 along the highway in October of 2010, when he collided with a minibus, killing 11 passengers along with the driver.

After the critical incident, the lorry driver was immediately arrested but was remanded and was later granted bail.

Moonsammy, a father of four, was represented by Attorney at law Mursaline Bacchus. Bacchus had asked the court for leniency because of the psychological impact of his client having to wait almost eight years for trial. Bacchus said that his client had already endured enough and thus a custodial sentence should not be enforced.

Attorney Bacchus argued that “he (Moonsammy) might have made an error of judgment with distance in his own mind to attempt to overtake a vehicle which was in front of him. He has never been exposed to the police before this and he has parental responsibilities. I am doubtful whether Your Honour would want to put him in a place where his entire family will be made to suffer.”

Meanwhile, in response, Justice Reynolds noted that “It is against this backdrop that I thought that a different approach might have made a difference at this point in time. The loss of life is of concern to us all.” He further stated that “We are a country of less than a million people and can ill afford one death; we need all for the development of Guyana. We do not know what contributions those twelve would have made to the development of Guyana,” noting that the sentences are to run concurrently.

Further on, State Prosecutor Attorney at law Tuanna Hardy sought 18 witnesses, several of whom were survivors. She explained that on the day Moonsammy was questioned, the lorry was driving above the required speed, he overtook another vehicle, went in the lane of the minibus and the smash-up occurred.

The Court heard from Moosammy himself that it was the minibus who was speeding at the time and took him lane.

Even though several family members cannot see their relatives again, they are now breathing a sigh of relief. Several were seen smiling and seemingly praying, while others cried at the sight of Moonsammy walking out the Court.

One woman told Demerara Waves Online News “I am glad this happen, it took a while but it’s finally here. None of them can’t come back, but me satisfied.”