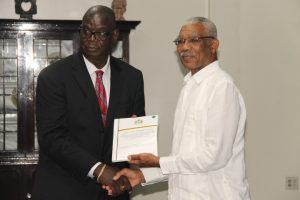 The National Assembly has picked three persons to sit on the Police Service Commission (PSC), paving the way for that body to be appointed to take disciplinary action and promote senior officers of the Guyana Police Force.

Slowe heads the list of persons recommended by the Committee of Appointments of the National Assembly for appointment to the Police Service Commission. Slowe earlier this year conducted a Commission of Inquiry into the performance of the Guyana Police Force in the investigation of an alleged assassination plot against President David Granger.

The recommendations will now be submitted to the President for consideration appointment if found to be favourable to the Head of State.

At Thursday’s sitting of the National Assembly, Chairperson of the Appointments Committee, Dr. George Norton laid the 11th Report of the Committee on Appointments in relation to the appointment of members of the Commission.

Members of the Committee unanimously adopted this report during the April 11, 2018 meeting.

The nomination process was conducted in accordance with Article 210 (1) (C) of the Constitution states that ” four members appointed by the President upon nomination by the National Assembly after it has consulted such bodies as appear to it to represent the majority of the members of the Police Force and any such body it deems fit.”

In August, 2017 President David Granger had instructed the then Police Service Commission not to proceed with the promotion of several officers. That Commission expired on September 4, 2017 and since then there has been no replacement.