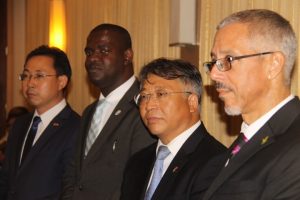 As Guyana’s largely forestry-based exports to China recover, local businesses are being urged to explore opportunities to sell more food to that Asian country and attract Chinese tourists when they attend the inaugural China Import Expo to be held later this year in Shanghai.

Minister of Business, Dominic Gaskin told a cocktail reception held Wednesday night to raise awareness about the Expo to be held from November 5 to 10 that realistically Guyana is not a big market and so local businesses should explore selling their goods and services to other countries.

In that regard, he said Guyana could do well with a “small piece” of China’s tourists and at the same time take advantage of that country’s large food market.  “We should carefully consider how we can sell more food to not just China but the rest of the world but certainly China has an appetite for whatever we can produce so I think that’s another challenge so I think between the tourists and the food, I think it is worth our participating,” he said.

China’s Ambassador to Guyana, Cui Jianchun said last year, there were 130 million Chinese tourists and no travelling from Guyana to China is easier because there are direct flights from China to Panama.

He noted that Guyana mainly exports forestry-related and seafood products, as well as some ground provisions, fruits and vegetables, mammals, primates, clay and sand. 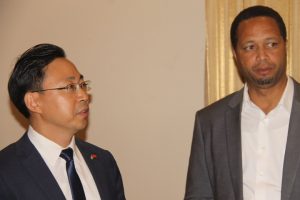 The Chinese  Ambassador noted that his country has invested US$200 billion and created 1.8 million jobs in Latin America.

He urged Guyanese businesspersons to participate in the China International Expo to find new partners and promote local products, ideas and services. The Chinese envoy said the global trade fair would also allow Guyanese to reach out to other countries. “I think it will not only showcase the Guyanese ideas to the Chinese people but also is an opportunity to showcase Guyana to the international business people and have the business leaders…,” he said. Cui promised that China would be willing to coordinate with other Heads of State, public and private sectors to meet with the Guyanese delegations.

The GO-Invest CEO said his agency would be having a booth at the Expo and would be willing to assist Guyanese companies to set up booths there. He urged local businesspersons to attend the event. “It’s an investment that is worth it,” he said.

Representing the Ministry of Foreign Affairs was Ambassador Troy Torrington said the Expo’s wide and varied international participation “unlocks vast opportunities for Guyana that can open the doors for enhanced collaboration and networking.”

“Without being exhaustive, Guyana’s participation in the international exposition offers the possibility for Guyanese owned businesses to display their products and services with a view to cementing investments and trading opportunities based on the strong and rich complementarities between Guyana and China,” he said.

The expo is expected to afford Guyanese the opportunities to purchase clean energy, light manufacturing and agro-industrial equipment.