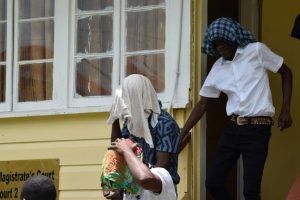 Except for Steve Hercules, who pleaded guilty, the others pleaded innocent, were refused bail and remanded to prison until May 10, 2018.

Hercules was expected to be sentenced later Tuesday by Providence Magistrate, Sunil Scarce. Defence Lawyer, George Thomas asked the court to be lenient with Hercules because he did not waste the court’s time.

They also plead not guilty to fraudulently converting a motor vehicle identification number from  PVV 6204 to HC 4543.

They are also expected to be charged with attempted robbery of a poultry farmer.