The request was made by their lawyer, Anil Nandlall who said he would be giving the DPP until weekend to respond before he challenges the charges in the High Court.

“I respectfully invite a review of the said charges for the purpose of specifically considering whether the particulars of the offences disclosed any offence at law, more particularly, the offences for which the accused persons have been charged and if not, I further invite you to consider exercising the powers vested in your office by Article 187 of the Constitution of the Cooperative Republic of Guyana and to discontinue the said charges, forthwith,”  Nandlall told Hack.

The case comes up again before Chief Magistrate, Ann Mc Lennan on May 7, 2018 by

which time the Lower Court is expected to decide the next step of Singh and Brassington do not make an appearance.

Nandlall said “by Friday if I get no response, this weekend I will be working towards the High Court action”.

Nandlall, a former Attorney General under the People’s Progressive Party Civic-led administration until May 2015, also told the DPP that she has to decide the basis and motive for any charges to avoid any abuse being meted out to persons. “I respectfully wish to remind you that the office of the Director of Public Prosecutions bears a constitutional responsibility to protect the citizenry against the institution of criminal charges that are based upon malice, mala fides, ulterior or sinister motives and vendetta and/or from charges that can reasonably yield a lawful conviction,” he said. 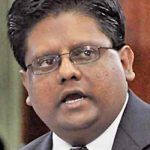 The former Finance Minister and the former NICIL Head were last week charged in absentia in connection with the sale of three parcels of land for more than GY$900 million without valuation for two of them and in the other instance ignoring a valuation altogether.

Similarly, they are accused of selling 103 acres of state land, by an agreement of sale and purchase, to National

Hardware Guyana Limited for GY$598,659,398 (VAT exclusive) with first procuring a valuation. The third and similar charge also has to do with the sale of 4.7 acres of land for GY$150 million to Scady Business Corporation, “knowing that the said property was valued at GY$340 million by Rodrigues Architects Associate, a competent valuation officer.

Opposition Leader, Bharrat Jagdeo has labelled the charges frivolous and said ultimately it was Cabinet, under his presidency, that had approved the land sales based on recommendations by the NICIL Board.