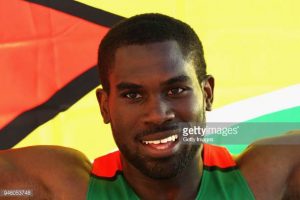 President David Granger has congratulated Troy Doris on what he described as a “golden achievement” on receiving the news of the national athlete’s outstanding performance at the 2018 Commonwealth Games, which concludes on Sunday in Australia.

Doris, won gold in the Triple Jump with his 16.88 metre second round leap, finishing ahead of Dominica’s Yordanys Durañona and Cameroon’s Marcel Mayack II, who won silver and bronze respectively.  The Head of State said that the win has made every Guyanese exceedingly proud and demonstrates that with hard work and sacrifice great feats can be accomplished.

He expressed his personal pride in Doris’ victory, noting that his win gives the nation something to celebrate and endows each of us the pride of knowing that the Golden Arrowhead was flown high on the international stage.

Director of Sport, Christopher Jones has said that Doris would be an awardee at the National Sports Commission awards scheduled to be held on May 24, 2018. He said every effort would be made to coordinate with Doris to ensure he is in Guyana to receive the award.

The Ministry of the Presidency said government will continue to invest in sport development locally so that talented athletes like Doris can receive the support they need and more young people can reach their full potential as sport men and women.

“Guyana is proud of all of the athletes and officials, who represented Guyana at the 21st staging of the Games.  The team was made up of 20 athletes competing in badminton, boxing, rifle-shooting, squash, swimming, table tennis and track and field,’ the ministry said.