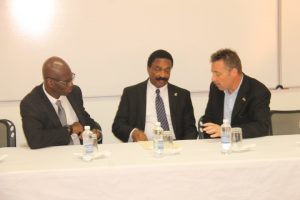 Attorney General and Minister of Legal Affairs, Basil Williams on Monday said the extent of corruption by government officials is far less compared to up to about three years ago.

“I could venture without any fear of successful contradiction that since we entered into government, we have not experienced any case of the scale of those that we have inherited and revealed by those forensic audits,” he said.

Except for one case involving former directors of the Guyana Rice Development Board, which is limping along before the Magistrates’ court, the law enforcement agency is yet to prosecute anyone for any of the high-profile alleged instances of corruption such as the allocation of lands at Goedverwagting-Plaisance also known as PradoVille 2.

“This two week course, really, is being launched under the spectre of the United States State Department’s report yet again impaling us for our fight against money laundering and corruption. I noticed they have added government corruption and that’s what my government has been fighting for the past three years , pursuant those forensic audits which produced certain investigations, charges and prosecutions,”  Williams.

He added that government “has been doing its part” by holding anti-corruption sensitization seminars countrywide, resulting in “significant impact” on the misappropriation of State assets. 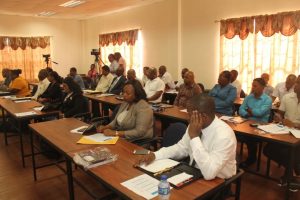 Participants at the opening of a two-week workshop on Fraud, Bribery and Corruption that has been organised and funded by the United Kingdom

For his part, Williams recalled that the Auditor General has singled out overpayment to contractors by public officials “which is but one of the nefarious devices employed to rob the government of billions of dollars.”

The Attorney General said financial crimes have been added to the responsibilities of the Special Organised Crime Unit of the Guyana Police Force as part of government’s crackdown on corruption.

The US says the law provides for criminal penalties for corruption by officials, and the government generally implemented the law effectively

The report states that Guyana’s most significant human rights problems were alleged government corruption, including among police officials, and laws that discriminate against women and lesbian, gay, bisexual, transgender, and intersex (LGBTI) persons.

Inadequate training, poor equipment, and acute budgetary constraints , according to the report, severely limited the Guyana Police Force’s effectiveness. “There were reports of corruption in the police force”.

The two-week course- which is being held for selected agents of SOCU, State Asset Recovery Unit, Criminal Investigations Department of the Guyana Police Force and the Customs Anti-Narcotics Unit- will focus on understanding bribery, its harm and the laws available to deal with the scourge.