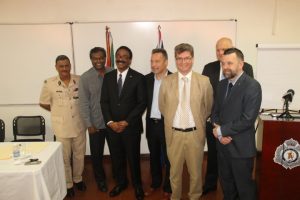 Addressing the opening of a two-week workshop on fraud, bribery and corruption, Britain’s High Commissioner to Guyana, Greg Quinn said he was unapologetic in his stance.

“There is no place for corruption within the security agencies in Guyana. If officials or individuals cannot work with honesty and integrity, then they should be drummed out, prosecuted and imprisoned as necessary. If people don’t like the sound of that, then frankly: TOUGH!,” he said.

Quinn said security agencies could not expect respect and cooperation from the public if they themselves are not willing to operate within and be subject to the law.

“All of you here today can and must set the example for everybody else to follow,” he said in his address to participants of the two-week workshop that has been funded and organised by the British government as part of its support to Guyana’s Security Sector Reform Programme.

The course would focus on investigating serious and complex fraud, bribery and corruption cases, and an examination of major fraud and bribery case scenarios designed for the participants to put into practice what they are learning.

“All of the participants of this course are in the frontline of countering bribery, fraud and corruption but with that comes with responsibility ” he said.

Meanwhile, the British envoy announced that Retired British army officer, Russel Combe would be returning shortly to serve as security advisor to President David Granger for one year.

2018-04-09
Denis Chabrol
Previous: Corruption in government circles has been reduced- Attorney General reacts to US report
Next: Basil Williams vs Joseph Harmon for PNCR Chairmanship?