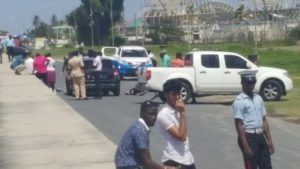 The scene at the Georgetown Seawall Road where three men were gunned down on March 15, 2018.

Minister of Public Security, Khemraj Ramjattan on Wednesday declared that he would be sticking with the Guyana Police Force’s version of the shooting death of three suspected bandits, and prefers to await the outcome of an inquest into the incident.

“I am on the side of the Police Commissioner. I believe his version and what transpired is the truthful version,” Ramjattan said when asked by Demerara Waves Online News.

He said police investigators were awaiting three statements from Attorney-at-Law, Nigel Hughes as part of a probe into the March 15, 2018 incident at the Georgetown Seawall.  Said to have been bandits who robbed bank customers, those killed were hose shot dead by police are 46-year old Dextroy “Dutty” Cordis of Grove, East Bank Demerara; Kwame Assanah of Buxton, East Coast Demerara and and 57-year old Errol “Dynamite” Adams of Dartmouth, Essequibo Coast and Buxton, East Coast Demerara.

The police version of the events is that an unnamed businessman had exited Scotibank, Robb Street and eventually he ended up at the Georgetown Seawall Road where the men were about to rob him when police intervened and the suspects were killed in an exchange of gunfire.

After the Minister of Public Security said the matter would eventually be dispatched to the Director of Public Prosecutions and most likely a Coroner’s Inquest would be ordered, he was asked on what basis he was taking the police force’ version. He cited “their credibility and reliability and the fact that there were some questions to be asked of” eyewitness, Devon Lyte. Lyte’s supervisor has since he (Lyte) was not on the roof of the Georgetown Softball Cricket Ground building from where he claimed he had seen the incident.

Pressed on why he was supporting the police in the absence of the inquest, he said  that was what government’s do instead of demoralise the law enforcement agency. “Simply because that’s what you normally do….The majority of the cases, any good responsible government will attach some credibility and reliability to the police investigators and that’s how it is. That’s the routine thing unless there is something so badly done or so egregious that you are going to question the police immediately,” he said.

“The Coroner’s Inquest will find out even better because there can be the witnesses being called there and I hope the Coroner being the kind of investigator, they (witnesses) are not going to be afraid to come forward- all those witnesses who were allegedly eyewitnesses to the actual incident,” he said.

Concerns have been raised about the fact that the suspects received multiple gunshot injuries and only one gun was recovered from the scene, but Ramjattan said “were told that they were firing at the policemen and they had to shoot back”. He said “it would appear” that all of the men were shooting at the lawmen.

“I don’ want us to start demoralising our policemen because there is an extraordinarily negative that can happen and I am going to support my policemen until such time as they have been proven to have done something wrong,” said Ramjattan, a lawyer by profession.

While in opposition, the Alliance For Change,  People’s National Congress Reform and the Working People’s Alliance had repeatedly condemned the then People’s Progressive Party Civic administration for presiding over extra-judicial killings by police and alleged state-sponsored death squads.