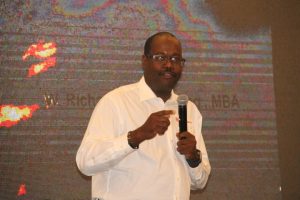 A Trinidadian Electronics Engineer on  Tuesday said sufficient opportunities should be made available for the transfer of technology and expertise to Guyana.

He noted that companies in his country pay as much as US$2,500 per day to hire technology”so-called” professionals to deliver services, and in theory Guyanese at the same level could not do the same thing.

He issued a call for Guyanese to benefit from technology transfer and training, one such opportunity being the construction of the Liza Destiny- a floating production, storage and offloading vessel- that will eventually be anchored offshore Guyana to collect oil extracted from a well there. “Liza Destiny which is the FPSO being constructed in Singapore or wherever should have Guyanese nationals there, now, this instant involved in the engineering, involved in the design, involved in the fabrication, involved in all the procurement and systems that are being built,” he said.

Small told participants at the Business Forum that Guyana should begin focusing heavily on technology downstream industries to cater for “metal islands” such as the Liza Destiny- floating, production, storage and offloading vessel- as well as two other oil discovery drill-ships. ”

Meanwhile Chief Executive Officer of the Guyana Telephone and Telegraph Company (GTT), Justin Nedd announced that his company was now read to offer Cloud Services. ” Starting today, I would like to announce that  we are offering Cloud Services to businesses..This means that we will now take the burden of buying, updating software, doing back-ups and securely storing your information. The use of the Cloud will free you and allow you to focus on your core business,” he said.

At the same time, he suggested that Guyana’s policy framework needs to keep abreast with technological advancements- something his company continues to discuss with government ahead of full liberalisation of the telecommunications sector that will allow for everyone to pay the same taxes, abide by the same regulatory oversight and abides by the same laws. “Acceleration of technological change must be done in tandem with massive changes in policy and institutions,” he said at the formal opening of GTT’s Innov8 Business Forum.