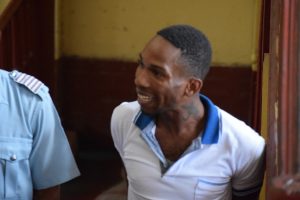 That incident occurred on March 6,2018 at Main Street.  He pleaded not guilty to that charge.

It is further alleged that Archer on March 7, at Camp Road Georgetown incurred another debt, this time to a taxi driver the sum GY$46,000 by travelling with Jamila Dazell without paying.

Archer on the said day allegedly stole a cellphone from the said Jamila Dazell.

To those two charges he also pleaded not guilty.