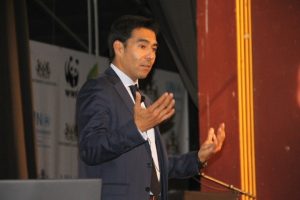 Former Manager of Chile’s Sovereign Wealth Fund, Eric Parrdo on Friday said Guyanese should not expect huge salary increases when the country begins earning loads of cash from oil exports, and there needs to be broad-based national consensus on wealth-management laws.

His words of caution were issued at an interaction session with journalists and other interested persons at The Theatre Guild, one day after he and other experts briefed President David Granger and several ministers on the implications of the oil sector.

“It is very easy for the populace to say you know what ‘we are going to increase wages like crazy’…That’s not possible because we can enjoy it in the short term but then inflation is going to be up, all the prices are going to be up and then we have to reduce economic activity and this creates unemployment for the people,” he said.

Parrdo said Guyana’s economy would have to have the required capacity to absorb large inflows of cash  to the point that it does not jeopardise economic activity. The United States-trained economist acknowledged that finding the right balance is usually a difficult task, but Guyana needs to have an discussion on that matter.

With Guyana’s first oil production expected in 2020, the Chilean economist recommended that this country uses the time to pass the required laws on fiscal management related to the fiscal rules and the Sovereign Wealth Fund. Noting that regardless of who wins the 2020 general elections, Guyana would need the legislative framework to manage the funds which should emerge out of bipartisan consensus. “If you pass the law, you can say ‘we are going to ring-fence the resources for the Guyanese people and we need that process now. We need to reach the consensus with the full society then we need to pass the law, hopefully before 2020 because the revenues are coming in 2020, the temptation could be high and because you have an elections,” he said.

Sir Paul has recommended that Guyana limits its spending to capital projects and education that would add value to the economy instead of spending lavishly which would result in an increase the value of the Guyana dollar, currently trading at US$1.00 = GY$213.00.

Parrdo further recommended that the fiscal rules be simple and easy to communicate as well as be credible and flexible to deal with shocks. He confirmed telling members of Guyana’s Cabinet and others that the country needs to strike a balance between spending and saving,  and whether such savings should be stabilisation, pension, infrastructure or heritage. Other questions for Guyanese authorities, he said, are whether the spending priorities should be infrastructure, energy, education, health among others; whether it is the government, Central Bank or an independent institution that should manage the wealth, and what capabilities Guyana needs to implement a fiscal stabilisation agenda.

When he was Manager of Chile’s Sovereign Wealth Fund, he reported directly to the Finance Minister who was responsible to Congress, in addition to “a lot of auditing, a lot of reporting”.