“If you tear this contract up, nobody else will come” – British Economics Professor on ExxonMobil’s contract with Guyana 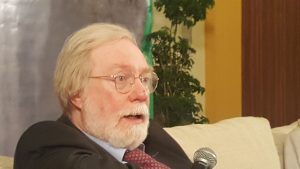 A British Professor of Economics and Public Policy, Sir Paul Collier  on Wednesday warned that if Guyana scraps  the ExxonMobil contract that would have disastrous consequences for the country’s investment climate, but he instead recommended strongly that the country beef up its capacity to avoid tax evasion by oil companies.

“Whatever you do, if you tear up your first oil contract, you are also tearing up your last oil contract. Once you get the reputation of being unreliable, the game is up,” he told a select group of senior journalists, adding that government would need “a ton” of geological information to decide whether or not Guyana got a bad deal.

Acknowledging that Guyana and ExxonMobil was “unequally matched”, he suggested that Guyana seeks to attract a few more other oil companies in the coming years instead of scrapping this one with ExxonMobil that has come in for sharp criticism in some quarters for its 2 percent royalty, US$18 million bonus, and a cap on future increased taxation even if local laws are changed.

“What would be absolutely disastrous is tearing this contract up. If you tear this contract up, nobody else will come. That is the brute reality. Governments have to establish credibility over the contracts they sign and if the contract you tear up within a couple of years of signing it, you’re dead,” said Sir Paul, a Professor of Economics and Public Policy at the University of Oxford’s Blavatnik School of Government and a Professorial Fellow of St Antony’s College.

He said none of the government ministers, with whom he and several other foreign experts had a one-day retreat at State House, did not ask about the possibility of amending the Production Sharing Agreement (PSA), which he called “a reasonable deal” with ExxonMobil.

Sir Paul  shied away from expressing any concern about the contract, saying that Guyana would get a lot of money which, if spent wisely, would lead to improved education, electricity supply and other infrastructure.

He said if Guyana clinches agreements with other oil companies, then there would be scope for to negotiate for better benefits.  As more companies are attracted to Guyana, he said there would be great scope for the country to ask for better terms and conditions. “It’s quite a good idea to get some other operators in and as you get some other operators, you will be able to compare one against the other and there are various clever devices you can use to, in a way, get one to police the other,” he said.

Guyana is not expected to rake in a lot of money in the first four years during which time ExxonMobil recovers its investment, but after that Sir Paul said Guyana would “quite a lot more” which would allow the country to prepare for a lot of cash pouring in. “You might think that you could spend a whole lot of money straight away. You couldn’t spend all straight away and so this gives you two years to really get the rules and institutions and then another three or four years when there is a gradual build up,” said Sir Paul whose research has focussed on, among other aspects, urbanisation in low-income countries and the issues of democracy in countries with low-income and high natural resources..

Sir Paul said he advised government to improve its tax collection system to focus on oil producing companies. “What you’ve got to do and this something I emphasised to government that they build the capacity to scrutinise what they pay in tax. Don’t assume that you can just trust them to pay the right amount of tax. They don’t,” he said.

In Nigeria, he said an audit had led to the oil companies having to pay US$350 million more than the monthly cheques that they had been sending to government. He noted that Norway has 40 specialist oil tax collectors who rake in 70 percent of all taxes.

He further recommended that Guyana builds a critical mass of distinctive institutions to manage oil wealth and defend them.

In addition to the two percent royalty, Guyana is entitled to 12.5 percent profit oil of the overall earnings