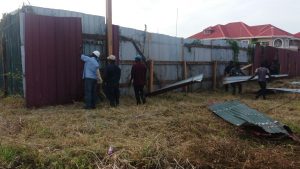 The Guyana Water Incorporated (GWI) on Monday- March 19, 2018- began dismantling a fence which it said was found to be encroaching on its reserve near the Lama Canal.

Only the first of the two-layered zinc fence was removed.

The utility company said in a statement that the fence was encroaching on 66 feet of the company’s reserve near the  Canal that is used to supply water from the East Demerara Water Conservancy to Shelter Belt on Vlissengen Road for purification and distribution.

The company further explained that section of the reserve measured 149 feet by 181 feet in 2015 but Monday had a measurement of 149 feet by 118 feet.

GWI’s Managing Director, Dr. Richard Van West-Charles, who was on site as workers dismantled the fence, said that the company cannot encourage such a level of encroachment, which he described as ‘lawless.’

He pointed out that it has been a long battle with residents regarding intrusions on the reserve and an attempt was made to meet with them in 2016 but they were a ‘no show.’ According to him, the utility will be taking action straight along the Lamaha Canal.

In the latter part of 2015, the Georgetown Mayor and City Council had decided to use the unoccupied portion of land for a “Green” park. However, GWI reached out and indicated that it was interested in erecting a corporate office on said land and the parties arrived at a mutual understanding.  At that time, there was a zinc fence erected behind the last house towards Sheriff Street in Georgetown. 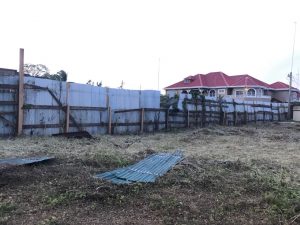 It was indicated to the occupier, Mr. Peter Ramsaroop that the issues surrounding ownership and occupancy will be addressed and communicated to the residents who were on the reserve. Recently, it became noticeable that the fence behind the last house had moved to take in more land.

The Lamaha Canal is utilized by GWI’s Shelter-Belt Water Treatment plant, and Regional Manager of Georgetown, Mr. Curtis Niles said that removing the illegal structures will allow the company to provide a better quality of water to residents of the capital city.

He explained that there are blockages and the illegal structures will hinder the cleaning of the intake of water from the canal, thus affecting water quality. According to him, removing the illegal structures will also allow the utility to function more efficiently, since access to properly clean the canal will result in the use of less chemicals for treatment of the water.